Posted by Green on July 4, 2021
in southerrn rock
as The Allman Brothers Band 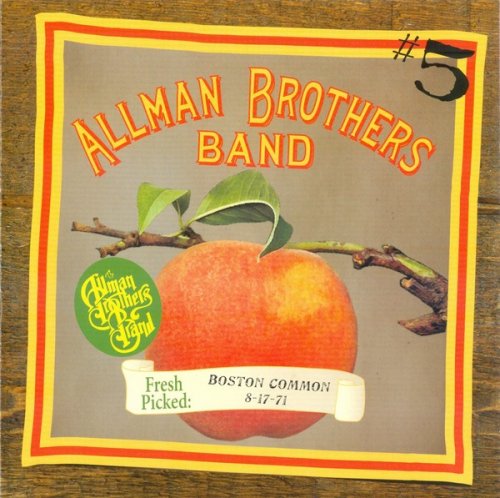 When the Allman Brothers Band founded its own record company (called, naturally, the Allman Brothers Band Recording Company) in 2002, the stated purpose of the label was to enhance the legacy of the group’s founder, guitarist Duane Allman, who led the ensemble from its formation in late March 1969 until his untimely death 31 months later on October 29, 1971. The first two releases from the band’s archive of live recordings — American University 12/13/70 and S.U.N.Y. at Stonybrook: Stonybrook, NY 9/19/71 — fit into that mission statement. Then, with Macon City Auditorium: 2/11/72, the company provided a glimpse at life for the surviving quintet, and, with Nassau Coliseum, Uniondale, NY: 5/1/73, the sound of a reconfigured sextet after the subsequent death of bassist Berry Oakley. Boston Common 8/17/71, the fifth album issued by the Allman Brothers Band Recording Company, returns to the Duane Allman-led outfit in a moment of triumph. The group’s outdoor appearance in Boston occurred six weeks after the release of their breakthrough album, At Fillmore East, and ten weeks before Allman’s death. The song selection doesn’t just repeat the tunes from the Fillmore East disc, the band opting instead for a few songs not heard on it, “Trouble No More” (from the 1969 debut album The Allman Brothers Band) and “Don’t Keep Me Wondering” and “Hoochie Coochie Man” (from the 1970 second album Idlewild South), the last as usual boasting a raucous vocal by Oakley. The standout performance is “You Don’t Love Me” (introduced on At Fillmore East), which stretches to 26 minutes and includes some powerful and unusually driving guitar soloing by Allman. Annotator John Lynskey documents the warm appreciation accorded the southern Allmans in Boston throughout their career, a good example of their ability to transcend their regional base to become a nationally successful act. This is an album for the faithful, and it will not disappoint them.