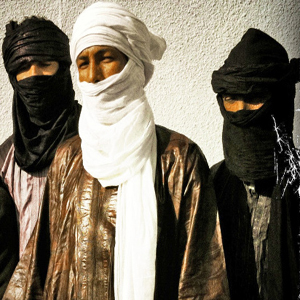 Terakaft (meaning “caravan” in Tamasheq) is a genuine desert rock band, sculpted by the pure searing air and the endless rolling sands of the Sahara. The stark, harsh conditions of the desert have permeated their wild riffs, and as a result they are the perfect embodiment of all that is wild and free in desert blues today. Terakaft was formed in 2001 with a line-up that included two former members of Tinariwen, and they have since made the electric guitar their own. Terakaft is a perfect mix of two rhythm guitars (one keeping the beat effortlessly, the other soaring and sweet) and the deep tones of the bass, resembling the delicate but strong steps of a camel making its way through the desert. The heavy, pulsating heartbeat of the percussion holds everyone together and completes the sound.