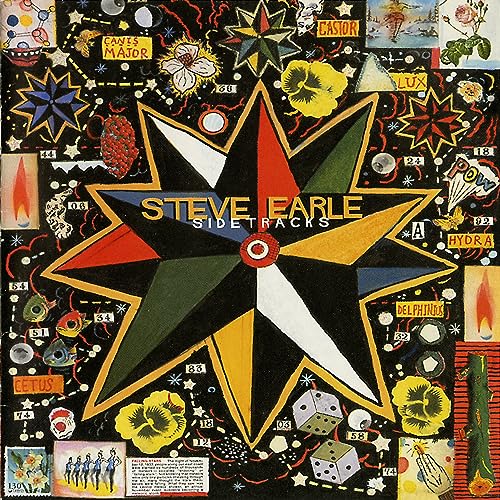 A young hotshot songwriter shows up in Nashville, signs a publishing contract, makes a record or two, and promptly gets dropped by his label. He spends time living in South Nashville slums, a needle stuck in his arm most of his waking hours. Somehow, he cleans up and starts making powerful records that Nashville tries to ignore but can’t. Ultimately, he becomes a mentor to an entire generation of songwriters who don’t see a dang thing wrong with mixing gospel with country, rock with bluegrass, or acting like music is powerful art.

Steve Earle’s history is well-documented, but it bears repeating every once in a while to remind us that he’s the real deal in more ways than one. Few artists have been able to rein in their demons once they’ve been given absolute freedom; fewer still have the ability to channel that experience into lifelike portraits of Civil War soldiers, death row guards, middle-aged men, reprobates, saints, and sinners with so much conviction that you feel like you’re sitting right beside them.

Sidetracks is Earle’s collection of what he calls “stray songs”, songs that never made it to albums, or which can only be found on obscure compilations, soundtracks, or import editions of his albums. This isn’t some combing of the archive’s darkest corners to make a few more bucks off of a legacy. Earle’s arguably as vital today as he was when he hit Nashville all full of spit and vinegar, and Sidetracks works as one of his most satisfying releases to date. He’s hardly scraping the bottom of the barrel — these are good songs.

The track that seems to have everyone talking is Earle’s stab at Nirvana’s “Breed”. The opening chords shred through your speakers, then go back to kick them around a little bit more. When you’re done marvelling at Earle’s faithful take (it’s easy to forget his rocker side sometimes), you find yourself remarking that Nirvana was one hell of a band — never a bad thing. Of the major risks that Earle takes on Sidetracks, “Breed” is definitely the most successful. The other, his reggae-laden version of “Johnny Too Bad”, isn’t too much of a stretch — he’s certainly flirted with reggae before — but Earle defers so completely to guests RNT and C-Fax that it loses the Steve Earle feel.

“Breed” and “Johnny Too Bad”, though, don’t mark the end of the covers. One of the hidden pleasures of Sidetracks is that seven of the disc’s 13 songs weren’t written by Earle. He’s joined by the Bluegrass Dukes for both a soulful, twangy take on Little Feat’s “Willin'” and a spirited live run-through of the Flying Burrito Brothers’ “My Uncle”. He reprises one cut (“Creepy Jackalope Eye”) from his sessions with the Supersuckers, and Sheryl Crow joins him for a go at the Chambers Brothers’ “Time Has Come Today” (Crow’s vocals are excellent, and Earle’s use of Abbie Hoffman soundbites is inspired). As for Bob Dylan’s “My Back Pages”, Earle pretty much admits in the liner notes that he’s singing out of his range, but the line “I was so much older then / I’m younger than that now” takes on a new shade of meaning when he sings it.

Of Earle’s original compositions, two are instrumentals: the Celtic flavored “Dominick St.” and the bluegrass-steeped “Sara’s Angel” (both left off of his Transcendental Blues album). “Some Dreams” (from the soundtrack to The Rookie), “Open Your Window” (from Pay it Forward), and “Me and the Eagle” (The Horse Whisperer) are all classic Earle meditations on taking a chance. They’re all fine songs, but the real treasure is an alternate version of Dead Man Walking’s “Ellis Unit One”. Featuring the Fairfield Four, this version offers a resonant spirituality that drapes itself comfortably over the song’s stark, harrowing frame.

Naturally, Sidetracks lacks the thematic consistency of a “proper” Earle album like Train a Comin’, Transcendental Blues, or I Feel Alright, but it still holds up extremely well. The material works together, and Earle’s choice of covers is mostly in keeping with his increasingly political elder-statesman stance. There’s not a clunker to be found anywhere on Sidetracks (“Johnny Too Bad” might not feel like Steve Earle, but it’s still a good song), and it’s refreshing to hear Earle’s takes on so many other writers’ songs.