Posted by Green on July 14, 2021
in folk, singer-songwriter
as Stephen Stills 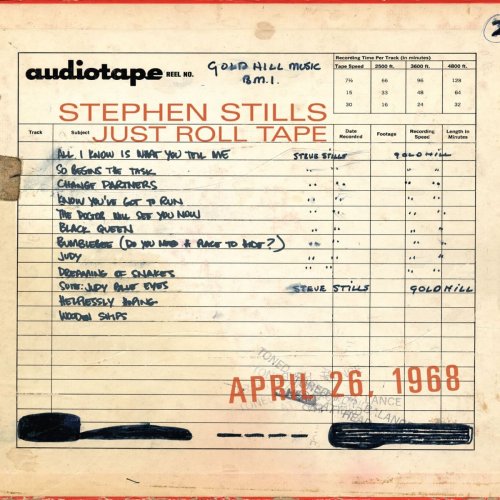 Unearthed after 40 years this recording of songs that were to pepper Stephen Stills’ subsequent career twists and turns are a revelation. For a generation who now regard Stills and his compadres as coke-dimmed irrelevancies, living on past glories of some mythic West Coast idealism, it shows us how goddam talented this man once was. While the quality may be a trifle ragged in places, these demos could stand tall against most modern so-called acoustic troubadors. After all it was Stills, Young, Crosby and their ilk who started this stuff.

As his first major band, Buffalo Springfield, fell to pieces around him he bribed a session in a studio following a Judy Collins session. Anyone who’s heard the Springfield box set will know that Stills’ demos were always almost as good as the finished article. Featuring Stills alone with an acoustic, he runs through songs which were to appear on the first Crosby Stlls and Nash album (“Suite Judy Blue Eyes”, “Wooden Ships” and “Helplessly Hoping”) as well as other gems such as “Change Partners”, “So Begins The Task” and “Black Queen” that appeared on his solo work or with Manassas. Filled with the peculiarly Southern grace that he brought to his lyric writing and delivered in his signature high bluesy tone, he displays the confidence that so often tipped over into misplaced arrogance, but made him such a dynamic group member as well.

His playing is no less beautiful, showing how in those halcyon days his picking was more than a match for bandmates like Neil Young. Of course this is all made the more poignant by the fact that this is from a man who was once famously called ‘Old Steel Nose’ by Elvis Costello and fell so far from grace. He’ll never regain this level of inspiration again, but we should be grateful that we have another reason to go back and treasure him as he was at his peak.