Posted by Green on December 5, 2019
in country, soul
as Solomon Burke 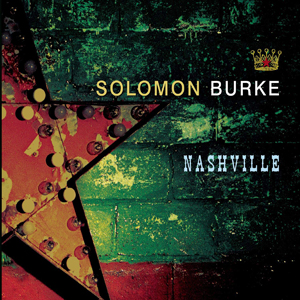 Solomon Burke’s return to country is as much a spiritual renewal as it is a reinterpretation of some of Nashville’s greatest mainstream and Americana songs. The 66-year old King of Rock & Soul has always plied the gospel, of course, but Music City sometimes forgets to feel it in its bones. Buddy Miller, whose gritty hillbilly pleadings always carry a healthy dose of otherworldly soulfulness, is the right producer to bring it all together, since he invites such sidemen as Sam Bush, Kenny Vaughan, and Byron House, as well as guests/duet partners Patty Griffin, Dolly Parton, Emmylou Harris, Gillian Welch, and Patty Loveless. This is the kind of album that clicks right off but continues to grow on you, such greasy, rolling blues-rock songs as Paul Kennerley and Barry Tashian’s “Honey, Where’s the Money Gone” loosening up your sacroiliac and Griffin’s affecting “Up to the Mountain” morphing into a secular hymn in Burke’s big hands. Not everything completely jells: The R&B chorines on “Vicious Circle” jar next to Miller’s plinking banjo and Li’l Abner framework, and this rendition of his searing “Does My Ring Burn Your Finger” cries out for wife Julie’s songbird harmonies. But when everybody sets their mouth right–as on Burke’s duet with Harris on the George Jones/Tammy Wynette classic “We’re Gonna Hold On”–the seas nearly part. Throw in some cockiness from the delightfully twisted psyche of Jim Lauderdale (“Seems Like You’re Gonna Take Me Back”) and Vaughan’s blistering chicken-pickin’ electric guitar, and lawdy, momma, ain’t that good news today! –Alanna Nash

1. That’s How I Got To Memphis
2. Seems Like You’re Gonna Take Me Back
3. Tomorrow Is Forever (with Dolly Parton)
4. Ain’t Got You
5. Valley Of Tears (with Gillian welch)
6. Honey Where’s The Money Gone
7. Atta Way To Go
8. Millionaire
9. Up To The Mountain (with Patty Griffin)
10. Does My Ring Burn Your Finger
11. Vicious Circle
12. We’re Gonna Hold On (with Emmylou Harris)
13. You’re The Kind Of Trouble (with Patty Loveless)
14. ‘Til I Get It Right