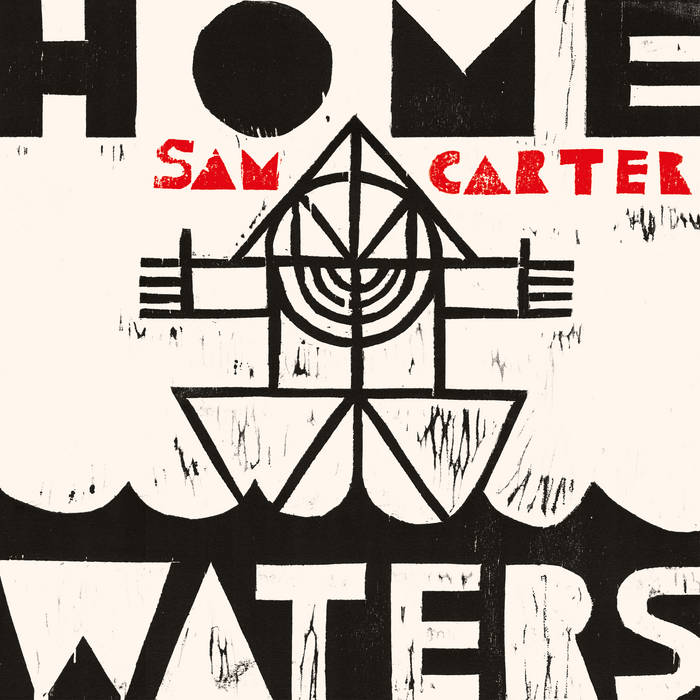 Back in 2016, Sam Carter released his third solo album How the City Sings, a characteristically strong set of songs centred around a seemingly turbulent relationship with London, where he was struggling to feel settled at the time. In that sense, Home Waters appears to be a natural progression, in that its central theme is one of searching for a feeling of belonging. However, on How the City Sings, songs like ‘Drop the Bomb’ and ‘Dark Days’, with their more aggressive electric instrumentation and fuzzy electric guitars, suggested a less contented artist. Of course, this was also the period when False Lights, an ace electro-folk collaboration with Jim Moray, had also really hit its stride, so it is easy to see how some of that heavier music bled into his solo project. Home Waters, on the other hand, with even the title suggesting an easier mindset, is an altogether calmer and perhaps even more focused affair.

The waters of the title gently reverberate throughout this album and Sam’s acoustic guitar, which is the bedrock of the sound, is as excellently played as ever (it’s easy to throw up names like Martin Simpson and Bert Jansch) and his steady and confident finger-style playing anchors many of the songs and provides the steady flow that works so beautifully across the songs. ‘Fly the Flag’ is a lovely example of this, with a quite complex picking pattern using bass and high strings evoking images of shards of light bouncing off of the ocean where a losing battle is being fought and a ship is sinking. Partway through, the addition of a quartet of string players adds drama, but it is subtly dealt with and only enriches the tune. On other songs, like ‘Slow Waves’, it is the gentle brush strokes down the strings that dictates the leisurely pace and ebb and flow of the piece, while a soft finger-picked pattern aides the gentle optimism of simple and purely sang lines like ‘Slow waves will wash you out to sea / Slow waves will bring you back to me.’ There is noticeable purity to the song writing on Home Waters that is very welcome; not a word is wasted and it fully illustrates the experience and ability of Sam as a writer.

Back on land, ‘The Forge’ is a cracking opener of intent; described by Sam as a metaphor for the creative process, this sprightly solo tune, with its lively percussive acoustic guitar refrain the only accompaniment, showcases a robust vocal and some solid writing: ‘Every mercy plea, every curse on the breeze, is a spark to the cinders inside me.’ Ruthless you might think, but great writing again and as a starting point, the song demonstrates plenty of artistic skill and integrity and is a perfect lead into what is a set as solid as the smith’s anvil, beginning with ‘She Brings me Home’. This one is immediately lighter in mood, with the addition of a minimal but silky electric guitar part alongside a jaunty acoustic core adding to the romance. There’s not much electric playing on here, with the final track being the only one structured around it, so its cameos are welcome and quite vivid.

Although almost all of the songs here are penned by Sam, Sandy Denny’s ‘Bushes and Briars’ is also included, which seems appropriate when considering the sense of place and parochial life that runs thickly through the song, connecting it strongly with original pieces like ‘The Forge’ or ‘Surprise View’. The latter is a gorgeously sad song with the narrator being placed at the titular view and lamenting the apparent passing of a loved one. The arrangement here is simple, with Sam’s soft cyclical acoustic line backed by the merest hints of the string players, who stay several steps back and come in spectrally and sporadically throughout.

However, where the other band members really get to strike out and flex their muscles is on the lone instrumental track, which is the maverick of the set. ‘The Watersmeet’ is a dramatic piece, a short yet multi-textured gem of music rooted in the classical style. The string players have the most fun here, with Mark Carroll’s cello bringing plenty of depth, while the violins of Edward Cross and Hannah Tattersfield and viola of Jean-Pierre Garde provide broad richness. Sam’s electric guitar crops up again here, with the distortion turned up, but he is careful to blend it into the mix to add a shot of colour instead of leading things. This eyebrow-raiser of a tune leads nicely into ‘Hold Back the Storm’, where the intro continues the drama briefly with a slightly heavier strummed acoustic guitar that blends well with the sinewy narrative describing townsfolk coming together to thwart the progress of a flood. The combination of slightly weightier music in parts with subtle and shimmering strings skilfully sends across a message of courage in the face of adversity which, probably incidentally given the timescale, particularly resonates at the moment and adds clout to an already strong song.

At the end of the set is ‘Grenfell Road’, which hardly needs a contextual explanation, leading into the electric guitar-led ‘Ships in the Night’. The former is as heart-wrenching as you would expect and acts as the antithesis to songs like ‘The Forge’ and ‘Bushes and Briars’, with their strong and evocative sense of place. ‘Grenfell’ is as clever a song in conjuring images as the previous two, but the message here is one of a place tragically disappearing and is all the more powerful for it. From an artistic point of view, it is perfectly judged, with a considered guitar part, Matt Ridley’s double bass hanging in the background and a vocal that favours sombre resignation over anger. Cleverly, the electric guitar that leads final track ‘Ships in the Night’ has more attitude about it than the acoustic that has monopolised the majority of Home Waters, and it comes in smoothly after ‘Grenfell’. Martin Douglas’ percussion is also strong here in its minimalism, with a simple shaken part underpinning the tune. The reforging of an old friendship that is the story is an optimistic note to end the album on and the return of our narrator to familiar ground is fitting and touching.

What I love most about this album is the clarity it displays; Sam’s guitar playing has never been better and his writing (and that of his producer Ian Stephenson on ‘Hold Back the Storm’) is clean, wise and often beautiful. The arrangements too are very delicately written, with none of the eight other players featuring across the ten tracks upsetting the balance of the music. To me, Home Waters is Sam Carter’s finest and most confident piece of work so far and best displays the honed talents of this valuable musician. A concise, cohesive and self-assured album that perfectly balances and blends ace song-writing with considered and finely judged arrangements, centred around technically accomplished and nuanced acoustic guitar playing. In short, Home Waters is a must-have.