Posted by Green on October 17, 2019
in ambient, electronic
as Robert Fripp and Brian Eno 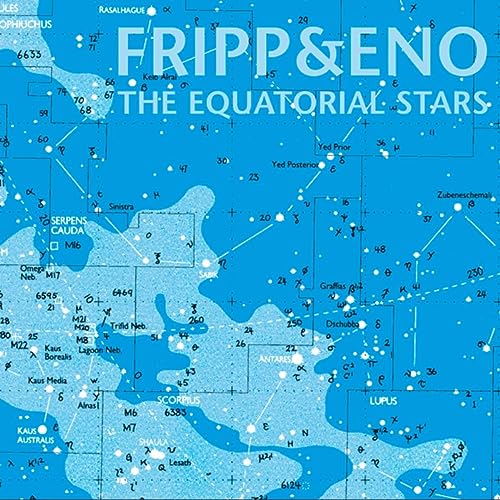 Almost 30 years on since Evening Star, Robert Fripp and Brian Eno resume their collaboration, and remarkably, they seem to have picked up right where they left off. Remarkably, because Fripp’s more recent soundscaping has had a different quality than either his collaborations with Eno or his proper “Frippertronics” albums like Let the Power Fall or the solo side of God Save the Queen/Under Heavy Manners. Surely they’re not back to using the old Revox tape machine setup, but having Eno in the producer’s chair (not to mention making his own musical contributions) seems to add a warmth that’s been missing from albums like 1999. But much like Evening Star showed a progression from No Pussyfooting, The Equatorial Stars is another step forward while retaining all the same elements as their previous work together. On “Meissa,” there’s just a bit of glitch periodically applied to the background keyboards and guitar harmonics with Fripp soloing softly over the top. “Lyra” is even prettier, and you can really hear Fripp’s guitar lines trailing off into the distance. His tone here is less saturated than on the earlier albums, but there’s just as much sustain and his playing is beautiful and lyrical. “Ankaa” bears the strongest resemblance to the material on Evening Star, with that classic “Frippertronics” guitar tone. And just as their previous efforts were mostly, but not entirely, placid, The Equatorial Stars takes on a slightly more aggressive tone (if you can call it that) toward the end. “Lupus” adds the pulse of a heartbeat and a bit of sonic scuzz to the mix, and “Terebellum” takes on a slightly more ominous tone. Most surprising is “Altair,” which almost gets funky with a bit of bass and some chicken scratch rhythm guitar work. While Fripp is nominally at the forefront on The Equatorial Stars, Eno’s contributions and excellent production are just as important. There seems to be a genuine synergy when these two work together, and The Equatorial Stars is a worthy successor to their earlier brilliant albums together.