Posted by Green on September 27, 2019
in ambient, electronic, experimental
as Robert Fripp and Brian Eno 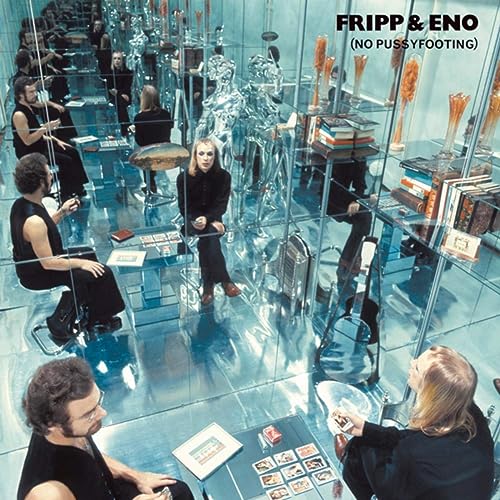 At the same time Brian Eno was working on Here Come the Warm Jets, he was flexing his experimental muscle with this album of tape delay manipulation recorded with Robert Fripp. In a system later to be dubbed Frippertronics, Eno and Fripp set up two reel-to-reel tape decks that would allow audio elements to be added to a continuing tape loop, building up a dense layer of sound that slowly decayed as it turned around and around the deck’s playback head. Fripp later soloed on top of this. (No Pussyfooting) represents the duo’s initial experiments with this system, a side each. “Heavenly Music Corporation” demonstrates the beauty of the setup, with several guitar and synth elements building on top of each other, the music slowly evolving, and Fripp ending the piece with low dive-bombing feedback that swoops over the soundscape, bringing the piece to its conclusion. “Swastika Girls,” on the other hand, shows how the system can be abused. With too many disconnected sounds sharing the space, some discordant, some melodic, the resulting work lacks form and structure. Eno and Fripp later refined the system on Evening Star and Eno’s solo album Discreet Music. Fripp would take the system and base whole albums and live appearances around it (particularly Let the Power Fall). But it was here on (No Pussyfooting) where it all started.