Posted by Green on October 21, 2019
in roots rock
as Robbie Robertson 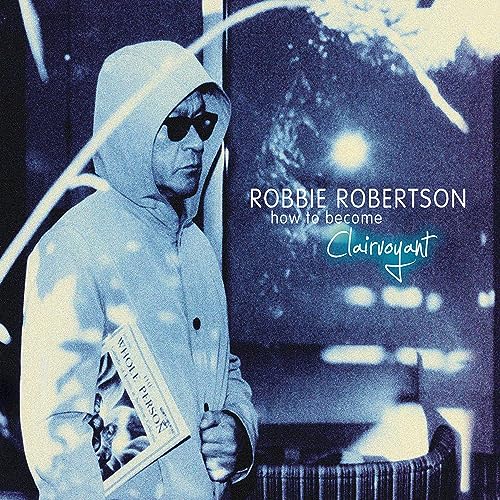 Expat Canadian guitarist/vocalist Robbie Robertson has never topped his first two major-label recordings with The Band, Music From Big Pink (Capitol, 1968), that included the timeless single, “The Weight,” or its classic follow-up, The Band (Capitol, 1969). But, then again, neither has anyone else.

Since the original Band broke up—its final days together in 1976 documented in director Martin Scorsese’s 1978 film and concert recording of the same name, The Last Waltz (Warner Bros., 1978)—Robertson has largely busied himself with film work, most notably working on soundtracks to Scorsese films including 1983’s The King of Comedy, 2010’s Shutter Island. He has also released a handful of solo albums, the most successful being Robbie Robertson (Geffen Records, 1987).

On How to Become Clairvoyant, Robertson’s first solo CD in ten years, he sings, “I do not play, no rock and roll,” in that distinctive, whispering growl that sounds as if it’s simmering just a half notch below bursting. It’s a repeated claim in the opening cut, “Straight Down the Line,” words from the mouths of story teller Robertson’s characters: an old bluesman in a striped suit, a black-robed gospel choir singer. It has to come from his characters, because Robertson surely plays some rock and roll, with a crunchy Neil Young-like rhythm guitar grumbling beneath snapping, stinging single notes, all in front of a whomping, wall-shaking beat. Rock and roll, indeed.

The sound settles into a folksier groove with “When the Night Was Young,” a tune that celebrates his youth, and a generation that could “save the world and stop the war,” at a time of sharing the back roads with “tent show evangelists, card sharks, grifters and Luke the Drifter.” As he did on the best of The Band’s songs, Robertson—with his modern, carefully-crafted sound and quintessentially America characters—creates moods and paints surreal back alley images.

“He Don’t Live Hear No More” rocks hard, sounding like a U2 collaboration with its dense, driving rhythm supplied, in large part, by the big explosive sound of the set’s primary drummer, Ian Thomas. Guitarist Eric Clapton joins in on “The Right Mistake,” an eerily laidback tune with some tasty background vocals and concise guitar licks crackling inside Steve Winwood’s bubbly organ. Clapton’s back on “Fear of Falling,” having co-written the tune with Robertson, and his smooth and mellifluous voice contrasts Robertson’s grit. Winwood is back, too, his organ whispering around the voices, and some acoustic guitar work that brings back memories of Clapton’s days with Delaney & Bonnie & Friends.

In the world of rock music, Robertson has few peers in the shaping of atmospheres and moods, and telling stories with his songs. Another line from “Straight Down the Line” says, “Some things have tradition, some shine like new.” Both claims could be made for How to Become Clairvoyant.