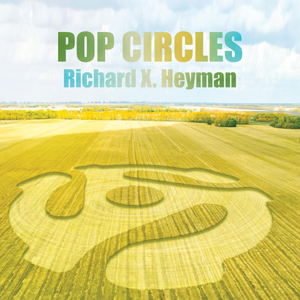 Pop Circles is the 13th solo record from NYC-based power-pop savant Richard X. Heyman (a founding member of The Doughboys). He produced the album at Eastside Sound in New York and the Kit Factory, his home studio. Special guests include cellist Julia Kent (Rasputina) and Chris Jenkins on viola. Pop Circles is being released by Turn-Up Records on June 14th, but The Big Takeover is highly excited to be hosting the LP’s premiere a week before it officially arrives.

Recording sessions for Pop Circles began at Eastside with drums tracking, and then moved to Heyman’s home studio. He laid down keys, percussion, a bit of bass, and layer upon layer of lustrous, ringing rhythm and lead guitar parts with his collection of vintage instruments: Rickenbacker 360 12-string, PRS Starla, Fender Telecaster and Stratocaster, Dan Electro baritone Martin Shenandoah acoustic and D-28, and Yamaha acoustic 12-string. The bulk of bass duties fell to his wife Nancy Leigh and the sumptuous string parts were performed by Kent and Jenkins.