Posted by Green on March 28, 2020
in country
as Reckless Kelly 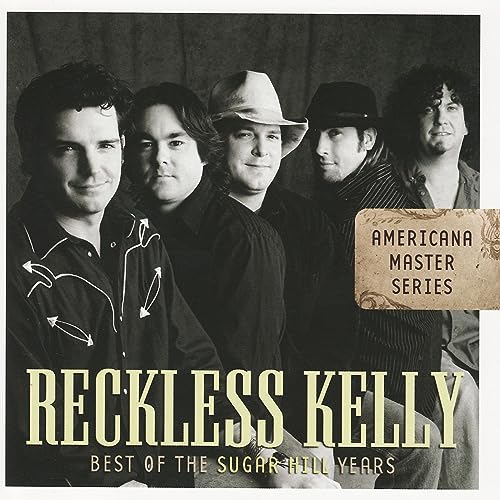 Reckless Kelly debuted on Sugar Hill in 2003, and by 2006 had cut two studio albums and one live record for the label. In a sense, this installment of Best of the Sugar Hill Years feels less grandiose than those by bands who have a deeper history with the label. One cannot argue, as one might with Doyle Lawson or the Lonesome River Band, that the group has achieved classic status. Best of the Sugar Hill Years is less a career overview than a snapshot of Reckless Kelly’s last four years. The snapshot, however, is a very lively one, offering a solid overview of the band’s work during that time frame and featuring vivacious alternative country that rocks hard. The band’s sound is built around Willy Braun’s songs and lead vocals backed by Cody Braun’s harmony, and augmented by David Abeyta’s guitar work along with a solid rhythm section featuring bassist Jimmy McFeeley and percussionist Jay Nazz. Perhaps because most of the tracks come from the group’s two studio albums, the material, from “Nobody’s Girl” to “Crazy Eddie’s Last Hurrah,” flows together well. There’s also one cut, “Rider in the Rain,” from Sail Away: The Songs of Randy Newman. Best of the Sugar Hill Years is limited by drawing so much material from two albums, but it is nonetheless a solid introduction to an energetic band.