Posted by Green on August 30, 2020
in psychedelic, rock
as Randy California & Spirit 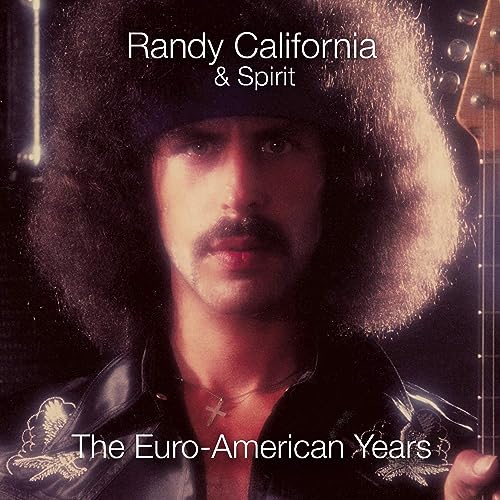 6 CD clamshell boxed set of “The Euro American Years” by Randy California and Spirit. The set that gathers together studio and live recordings made between 1979 and 1983 by the Randy California Band and additional live recordings by Spirit. In mid-1979 the trio incarnation of Spirit broke up and Randy formed a new solo band and embarked on a European tour supporting Ian Gillan. After recording a series of demos further studio sessions produced the recordings which would form his solo album Euro-American, released in 1982 (and included in this set).

The original boxed set of was compiled by Spirit archivist Mick Skidmore and was issued in 2006. The original concept for this box (which sold out very quickly in its first pressing, only to be consistently bootlegged in various countries via downloads and separate CDR discs for which the artists received no compensation) was to pull together the vast amount of music that Randy released during 1979-1983 period (although some tracks were recorded earlier and were shelved due to lack of a record deal). Due to demand from fans, Mick Skidmore has recovered from the archives an additional two CDs worth of previously unreleased material, namely a live concert by Spirit recorded in Greensboro, North Carolina in April 1981 before a wildly exuberant audience, along with The Randy California Band’s entire set at Reading Festival in 1982 and a part of the band’s set at Glastonbury Festival from the same year. This new edition has compiled and mastered by Mick Skidmore and features a booklet with a new essay and photographs from the period.