Posted by Green on October 14, 2019
in folk
as Petra Haden And Bill Frisell 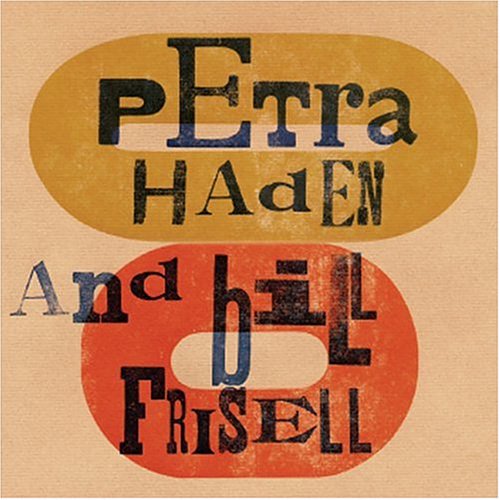 Working with singers is nothing new to the ubiquitous and stylistically impossible-to-pigeonhole guitarist Bill Frisell. But whereas his ’95 collaboration with Elvis Costello, Deep Dead Blue , was a live recording, stark in its simple meeting of one voice and one guitar, Frisell’s latest teaming with Petra Haden, daughter of legendary bassist Charlie, and singer/violinist for that dog, is an altogether more produced affair. Petra Haden and Bill Frisell finds both Frisell and Haden building layer upon layer of sound, creating a lush and appealing ambience that brings new meaning to a varied programme of originals, standards, traditional pieces and some surprising covers.

With a soft approach highlighting Haden’s often whisper-like vocals, the duo takes on Coldplay’s “Yellow” and Foo Fighters’ “Floaty,” tackling them more like folk songs, although Frisell’s overdriven guitar on both provides the link to the originals’ more assertive stance. Still, the use of acoustic guitar, loops, layered violin tracks, and Haden’s veritable chorus of vocals brings an unexpected richness and poignancy to these essentially simple songs.

Elsewhere Tom Waits’ “I Don’t Want to Grow Up” displays more naiveté than Waits’ version on Bone Machine , while their reading of “I Believe” has a certain Beatles-esque quality that belies its composer, Stevie Wonder. The Mancini standard “Moon River” has been covered by Frisell both live and on record with bassist Dave Holland and drummer Elvin Jones, but never with the kind of rubato elegance found here. “When You Wish Upon a Star” receives a similarly delicate treatment, with Frisell’s solo, deliciously rich, guitar proving all the accompaniment Haden needs to evoke the childlike innocence of the tune.

It is, in fact, the lyrical simplicity and lack of self-indulgence—even in light of their extensive use of overdubbing to build a broad tapestry—that makes the album such a pure and unaffected pleasure. Whether interpreting a modest traditional folk tune like “John Hardy Was a Desperate Little Man” or the Tuvan traditional piece “Baï-laa Taïgam,” where Frisell and Haden use everything at their disposal to create an hypnotic and almost statically-ambient sensibility, nothing feels unnatural or overly-considered.

It is Frisell’s uncanny and unselfish ability to blend into virtually any context while retaining his distinctive personality that makes any project he is involved in worth investigating. And Haden’s similar lack of ego, avoiding any superfluous displays and instead searching for the essence of the tune, meshes perfectly with Frisell’s sensibility. Petra Haden and Bill Frisell may not be as utterly exposed as Deep Dead Blue , but it shares a similar penchant for personal interpretation that is clear and economical, even as Haden and Frisell utilize the full potential of the studio environment to create a sound that is every bit as compelling.