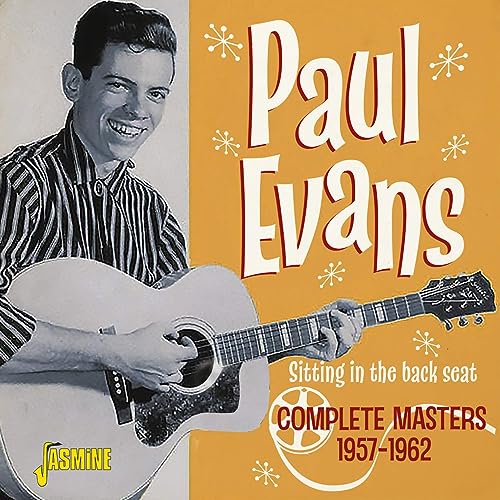 Hit songwriter for others and hit maker in his own right, American music legend Paul Evans’ active career spanned over six decades and brought him hits in the 50s and the 60s before he turned his attentions to the lucrative world of advertising and ‘jingle’ songwriting.

One of the better and more creative talents of the post-rock ‘n’ roll/pre-Beatlemania era, Paul tended not to record the songs he wrote for others – which include the Kalin Twins’ UK chart topper ‘When’, Bobby Vinton’s US chart topper ‘Roses Are Red (My Love)’ and several songs for Elvis Presley, including ‘I Gotta Know’ and ‘The Next Step Is Love’. But he recorded plenty of memorable hits of his own, including the self-written ‘Happy Go Lucky Me’, ‘Midnight Special’ and the immortal ‘Seven Little Girls Sitting In The Back Seat’ – which can all be heard here.

This new Jasmine 2CD collection brings together every commercially issued recording that Paul made between 1956 and 1962 – the A and B sides of every 78 and 45, plus the contents of two full albums and a handful of tracks that only originally appeared on a ‘Best Of’ collection. There have been previous CD anthologies on Paul, but this is the first to contain his entire vinyl output for that period, including many tracks that are making their CD debut here.

The frequently maligned era of the ‘Bobby’s’ did actually witness the flourishing of some important and enduring talents whose work has held up well as years have gone by. Paul Evans is unquestionably one such talent and Jasmine is delighted to bring you this definitive collection of his work – mastered, as always, from the finest available sources!