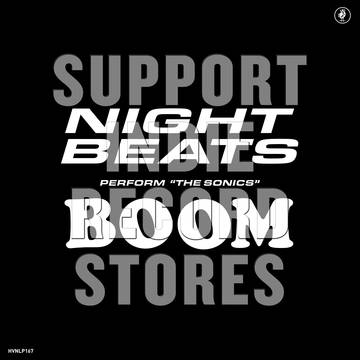 Few artists loom larger in the garage-rock legend than the Sonics. With raunchy, cult classics such as “Shot Down” and “He’s Waitin” off their 1966 album, Boom, the pioneering band staked their claim on rock ‘n roll, putting the Pacific Northwest scene on the map and cementing their place as heroes for future generations. Those that followed include Danny Lee Blackwell’s Night Beats, a group with its own underground origins as well as a direct, fuzz and feedback-coated link between the impact of the Sonics and their own potent sound. It’s this connection that led Night Beats to record Boom in its entirety, a proper homage to their musical forbearers. Blackwell, along with an arsenal of ace musicians manage to maintain the spirit of original recordings like “CINDERELLA,” “DON’T YOU JUST KNOW IT,” and a particularly unhinged version of “LOUIE LOUIE,” while injecting their own brand of earth-quakin’ soul-shakin, maximum R&B. Blackwell takes the lead on vocals and guitar, interpreting Gerry Rosalie’s mean scream with ease. Mike Brandon holds things down on drums as his partner in crime, bass genius Nate Ryan, while Julien O’neill grooves things up on keys and Joe Santa Maria wails on the horns. Finishing touches come from Marlon Rabenreither on acoustic guitar, plus Cole Alexander and Dan Gerbang on backing vocals—all working together to keep the Sonics’’ legacy intact, even as they tear the whole place down. Next time you hear a loud boom and your windows rattle, it’s probably a sonic boom alright; but on the other hand, it might just be “The Sonics Boom.”