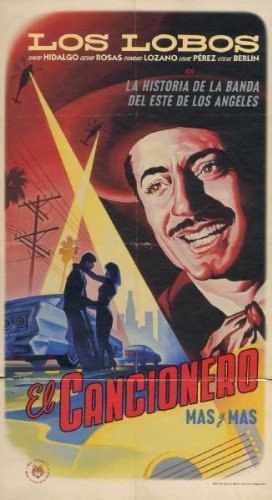 The Los Lobos fan might reasonably ask what–besides length and a wonderful accompanying booklet–Más y Más has over 1993’s two-CD Just Another Band from East L.A.. The answer is longwinded: here are album tracks (anywhere from four to eight from each studio album), outtakes, demos, and live cuts, as well as selections from tribute albums, soundtracks, and side projects. Some highlights that weren’t on the earlier collection include a 1983 rockabilly sizzler, “We’re Gonna Rock,” the similarly charged “Rip It Up” (an ’87 outtake from La Bamba), Richard Thompson‘s “Down Where the Drunkards Roll” (from the ’94 tribute Beat the Retreat), a live take on the Beatles‘ “Tomorrow Never Knows” (from a ’93 television tribute), “Route 90” (from the pristine Lobos children’s collection, Papa’s Dream), and a ’97 live version of Marvin Gaye‘s “What’s Goin’ On” with Sheryl Crow guesting on vocals. This doesn’t even take into account the songs from six soundtracks and a personal fave, “Alone in a Crowd” (from I Only Wrote This Song for You: A Tribute to Johnny Thunders) and a fab take on Doug Sahm‘s “She’s About a Mover” from ’96. This and more pushes Más y Más out of the group of multi-CD boxes devoted to defunct artists and into the camp of justly deserved career overviews created while the subjects are still in full flight