Posted by Green on October 4, 2019
in americana
as Lizanne Knott 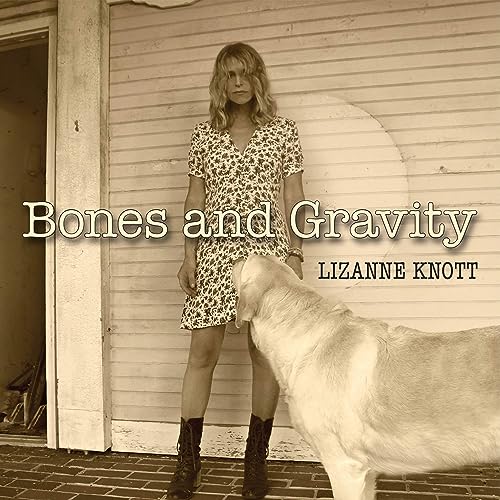 With now six solo albums to her credit, aside from her huge popularity in the UK, and in her home base region of Philadelphia, it’s fair to say that Lizanne Knott might still be an “emerging artist” in Americana terminology for national recognition. Her Bones and Gravity should go a long way in cementing her reputation, already held by many, as one of our best singer-songwriters.

A long-standing member of the Philadelphia music scene and managing partner of Grammy Award Winning Morning Star Studios, Knott has performed at some of the most prestigious listening venues in the US and throughout England, steadily gaining ground wherever she goes. She is a frequent featured artist on London’s acclaimed Bob Harris Show, BBC2 and other BBC stations, and she also receives airplay on AAA radio throughout the US. A local favorite on Philadelphia’s award-winning WXPN, her music has been used in independent films, TV movies, documentaries and by national non-profit organizations. We last wrote about her on these pages for her fine collaborative trio project Sunset Avenue Sessions released late last year.

Knott has a remarkably optimistic and refreshing outlook on life given a troubled childhood that had her on her own at an early age. She places this quote, likely a personal credo, from Sylvia Plath, on the inside jacket – “perhaps some day I’ll crawl back home, beaten, defeated. But not as long as I can make stories out of heartbreak, beauty out of sorrow.” Knott faced an abundance of material because she’d been writing for two years, she began to whittle down the songs, some half-written lyrics and melodies she’s recorded into her iPhone, to make this album. “I decided I wanted to create something personal and cohesive in nature. I wanted these songs to tell a story about the circumstances we all can find ourselves in, without placing blame on someone or something else,” Knott said.

It’s a personal manifesto of sorts, Knott navigates through pain and disillusion while managing to balance it with hope and laughter. Her long-time producer and engineer Glenn Barratt help her traverse a spectrum of emotions and sonic influences but keeps the sound organic and stays away from dense over-production. Accompanying Knott for the studio band are guitarist and pianist Ross Bellenoit, multiple string man Tom Hampton, bassists Chico Huff and Ken Pendergast, and drummer Erik Johnson. Additional musicians, including multi-instrumentalist Barratt, add guitars, cello, keys, violin, and background vocals.

”Walk Away,” as you might guess because it’s the ultimate negotiation tactic, is a pulsating, driving Springsteen-esque discourse on ending a failed relationship. The raw “Keep Me Alive” is autobiographical and a painful ode to survival with these two verses, exemplifying the tale – “Down at the mission I copped a few lines of cocaine/Wandered around until I was too numb to feel blame/I saw you walking the wind blowing warm in your hair/You walked right by me like you never had any care…..Now call on the angels cause it’s getting harder to breathe/Tell them I’m sorry and I need a ticket to leave/There’s a hole in my heart and I don’t think I can survive/I need somebody to hold me and keep me alive.”

The title track deals with love and loss. Either can happen in the link of an eye. Knott writes about losing someone close to her, saying she felt like her spirit had gone somewhere with the lost one. She claims that writing is her refuge when things get bleak. The cello creates the mournful vibe as she sings “But I know things you’ll never know/And honey that’s the way I’ll go/When everything we have, was never meant to last/And all that’s left for me are bones and gravity.” “Caroline” is about a person you first perceive is uncaring, maybe even mean until you realize it may not have been directed personally.

She holds little back about the bad person in the revengeful “Lay Him Down,” and then finds herself in a dilemma torn between Nashville and her home near Philly where her daughters live. “Emmylou” represents all that Knott likes about Nashville and her affection for her idol comes through. A clear standout track is “Hurricane.” Knott claims it would be close to her autobiography saving the line “I’m not a good friend.” The chorus is certainly memorable with the lines “I’m a Texas flood/I’m a burning house/I’m a hurricane in a wedding gown.” The band finds a nice driving tempo for this one while “Tired” rather appropriately is done without a band as she and Barratt (baritone guitar, piano, Wurlitzer) create intimacy.

”Kindness” was written for someone who came into her life at a pivotal time and impressed her. Later this unnamed person was criticized by another artist and was treated very badly She had only seen kindness in him, but the experience left her not knowing what to believe except that “kindness don’t cost a thing.” Finally we get the dog song in “Like I love My Dog.” Knott is renowned for her love for animals and work with shelters. The dog on the cover isn’t there by accident. The song may be a bit cliché’ but somehow the line “People leave you and let you down/But my dog will always stay” is clearly a part of who she is. The closer, “I Was a Bird” is also done without a band as she Barratt play a reflective dirge about coming back to a place you’re meant to be. Knott’s songs ring with so much honesty that sometimes they hurt because we can relate to much of it. They capture her struggles but leave us with hope.