Posted by Green on October 26, 2020
in americana
as Leah Barley 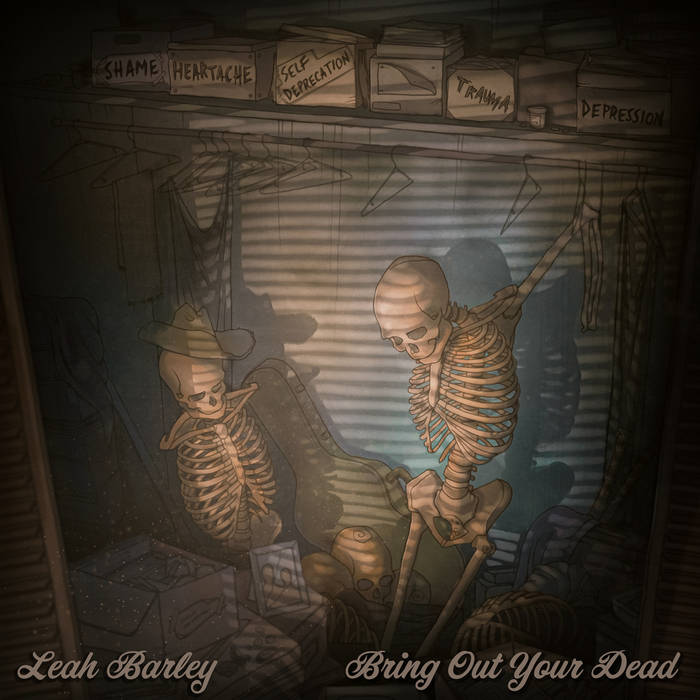 Vancouver based, Barley showcases her songwriting, vocal and instrumental skills on this, her first full-length album, ably supported by John Kastelic and Ross Christopher Fairbairn. Barley’s skills are considerable, resulting in thought-provoking lyrics, emotive singing and atmospheric banjo and guitar playing. The album cover depicts a group of skeletons resting in a wardrobe with a guitar case in the background.

On the top shelf of the wardrobe are various boxes purportedly containing such items as “Shame”, “Self-Deprecation”, “Trauma”, “Depression” and “Heartache”. Said items create a thematic structure to the album; the skeleton scenario suggesting that they may lie not only within the consciousness of the purveyors of this musical opus but also that of the listener.

The opening track, ‘I wish’ is a fiddle-driven, banjo-backed song that longs for kind words, compliments and support from a partner; for the time being they remain a wish. ‘Mountains’ has Barley singing of possibilities, hope and being open to new directions; its up-tempo optimism is infectious whilst, ‘Drinkin‘ drives at breakneck speed through a cathartic exposure of a life gone wrong through a failed relationship. There is, however, evident from Barley, enough spirit and vivacity to see things through; this spirit is thrown into sharp relief by the sardonic laugh at the end of the track.

Having developed an unknown neuromuscular condition in 2017, Barley is no stranger to long-term illness and how this can be a lonely, isolating experience. ‘Call Me Sometime’ is a heartfelt reflection on these issues and how vital speaking with others can be, assuaging feelings of hopelessness and depression.

Barley clearly demonstrates a lighter and darker side with the remainder of the songs falling into the latter category. It is good to know that she can leaven some of the darker themes explored on these latter tracks with the hope and optimism of the earlier, ‘Mountains’.

‘Bring out Your Dead’ is a dark, brooding song that features a beautiful fiddle solo from John Kastelic, who is himself an active member of several other bands including Salt Thief, The Living and Jay Malinowski and the Dead Coast. ‘Hush’ is a haunting, atmospheric tale of the darker sides of familial relationships driven by a strong acoustic guitar rhythm sitting in marked contrast to the lighter optimism early in the album. Chilling strings introduce, ‘Rise’ which has the feel of a centuries-old ballad; the ascending strings support an intense musical and vocal climax at the end of the song. The final track, ‘The Doctor’ is modern-day murder ballad which has at its centre the twangy goodness of Barney’s accomplished banjo playing, the perfect accompaniment to this chilling tale.

Through Barley’s exploration of the contents of the aforementioned wardrobe boxes, different shapes and shades of emotion are revealed that ultimately may lie to a greater or lesser extent within us all.