Kirsty McGee & The Hobopop Collective – The Deafening Sound Of Stars (2019)

Posted by Green on October 11, 2019
in folk, jazz
as Kirsty McGee & The Hobopop Collective 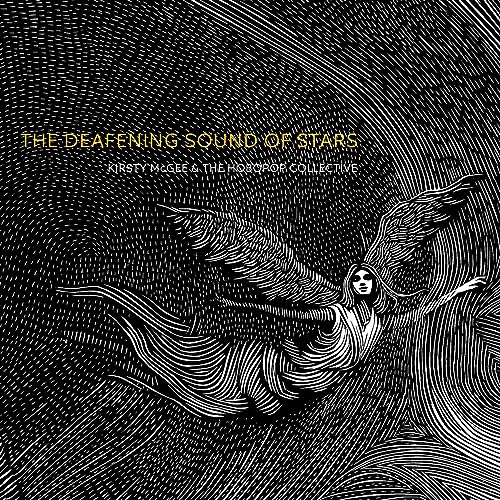 Although there was the Diamond Days EP, recorded as part of her York St John University artist in residence, in 2016, it’s been five years since the release of Kirsty McGee’s last full length album, Those Old Demons, the first studio recording since forming The Hobopop Collective with long-time collaborator Mat Martin (their debut being 2010’s live album No 5), marking her return to active collaborative duty in the wake of 2012’s largely solo Contraband following a two year recovery from a breakdown.

In the interim, she and then partner Martin separated and, while he gets a thank you credit on this much-anticipated album, he’s musically absent. She is, however, accompanied by a ten-string line-up that includes current Collective regulars Howard Jacobs on reeds, Biff on brass and cello and pianist Barkley McKay also providing lap steel and dulcitone piano, alongside other contributions on trumpet, double bass, and drums with Brazilian Tomás Oliveira on glass harmonica and a one-track guest appearance from Robert Garson, the Joshua Tree-based guitarist who forms one half of her Ocotillo duo project and with whom she released the limited edition Songs from the City and the Desert in 2017.

To remind, the concept affords a fluid and flexible format and allows her to range across musical genres, taking on folk, blues, jazz and pop without the limitations of being pegged or stereotyped, and such diversity is well-evidenced here. As such, it opens with Moving On, a lightly skipping folk-pop parting ways/new love song with harmonica bridge that moves on to another embarking on new love song, I Hold You In My Arms which, with double bass, background brass and clarinet solo has a lazy 30s feel.

Brass, bass and Jacobs’ reeds again providing the textures, it gets jazzier on the loose-limbed bluesy swing of Butterfly Pin, a number about not being able to get a fix on things as they ebb and flow, continuing the romantic thread with the boy meets girl “and suddenly love” Madness & The Moon, which, based around acoustic guitar and softly sung vocals, conjures thought of Janis Ian as she sings about “trying to make sense of the unruly galaxy” and how “what is love but an ocean trying to defy the moon.”

Returning to 30s ballroom dancefloor gentle swing with a touch of the Noel Coward/Hoagy Carmichael about it, Electricity is a rework of a track Diamond Days, featuring Garson but putting the focus on the brushed drums, double bass and reeds, another ‘sparks flying’ number.

By now, you should have realised this is an album about love that’s fated to be, of the moment when you realise you’re falling and are unable to stop yourself, even if you are wary, a sentiment that underpins Raven’s Eyes, a more experimental excursion into slinky jazz noir with its distorted feedback intro giving way to plucked strings and a seductive sway rhythm with McGee “cooler than an iceberg”, trying to resist the heatwave across the table but still feeling her “feathers burn”.

It’s back to Janis Ian territory with Copenhagen, a simple acoustic guitar-accompanied reverie of flying out to meet a new lover and waking up, cold and naked, in the half-light of the morning as she sings “we have four days so let’s be lovers in this city” and how “I guess our friends are saying ‘how can this affair they’re having ever work out?’/But they only have one city and we have two”.

It’s not all light, built around a sparse bass pulse before the nervy percussive rhythm sets in, Second Tuesday is a breathily sung blues about doubt (“Things feel wrong/On the tip of my tongue to say it”) and rising up from rough times while the finger-clicking rhythm, smoky jazz cellar blues Highway Dog Rose finds her stepping out into a storytelling narrative about Angel, a free spirit who, refusing to be tied down, “packed up her things on a Saturday/on Sunday she was down by the road” because “she didn’t want to be part of anybody’s bouquet”.

Keeping the musical mood, it’s back to the notion of being unable to resist a romance though with The Glimmer in the Corner of Your Eye which, opening on the striking line “I’d rather be innocent than dead”, goes on to add “I’d rather be here than disappear” so “don’t throw me out with the other trailer trash”.

It heads into the final stretch on the back of Sam Quintana’s double bass with the hushed insomniac lullaby of Greedy Little Things, a song about those niggling self-doubts that whisper in your ear and “take away your pleasure and …take away your calm”, fading away on a cymbal roll.

If things have been urban up this point with visions of ballrooms of romance and torch song dives, the feverishly sexual Mesquite Honey takes things out to the desert (where she first started writing the album), the lizards and cactus spikes with wailing harp, mournful trumpet and twanged guitar behind the train wheels rhythm, riding the Liberty Line “Mojave drunk on hot desire”.

Finally, the hushed lapping waves of the title track arrive, clocking in at just over an intimately, whisperingly sung, shimmering eight minutes as it searches and hopes for peace and calm, to find a world where “the good in you can find the good in me”, where an “untouched flower remains” and where the heart can be soil where the forest grows. It may be one of the finest things she’s ever written.

It all ends with another lullaby with the initially a capella slow waltzing languorous, sleepy-eyed Scorpion in a Mason Jar, echoes of Ian, Buckley and Cohen floating through the musical ether, as, rising to the height of her poetic imagery, she sings how “the devil is just a scorpion in a mason jar/And god is just a flicker of the light”, an affirmation of finding togetherness and love where “the tears in your eyes are not sorrow” and you can fall asleep in another’s arms, to someone near “singings so sweet and low”, safe in knowing you’ll still be held close when the dawn comes.

An unqualified celestial masterpiece and the most ineffable romantic album of the year, one to fall in love with and to.

According to the press, there is also a limited edition ‘sister’ album available featuring five field recordings, initial demos, recorded live in a medieval church in the summer Italian heat and featuring the sound of chapel bells, crickets, birds, electrical storms, an ancient passenger train and mosquitoes.