Posted by Green on June 4, 2020
in progressive rock
as King Crimson 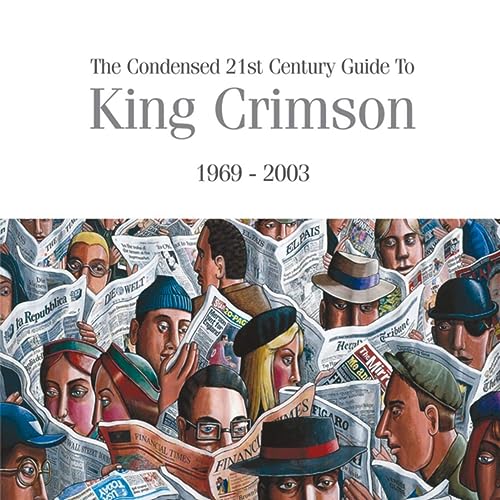 King Crimson is a decidedly unwieldy band. Spanning more than 35 years (as of this writing) and at least seven distinct lineups, and complicated by the studio vs. live dichotomy (not to mention no hits to speak of), this is a band that almost refuses to be anthologized. Anything less than a box set doesn’t really do the band justice, but anything more than two discs may seem like a grand investment to someone who just wants to get acquainted with them. Since King Crimson completely ceased to exist in the mid- to late ’70s and early ’80s, that seems a logical dividing point in examining the band’s output. And that’s exactly how Robert Fripp approached it when he assembled the 21st Century Guide to King Crimson in two volumes. Volume One covered 1969-1974 with two studio and two live discs, and Volume Two covered 1981-2003, also with two studio and two live discs. These were aimed at the uninitiated as “a comprehensive overview for new ears of all that is necessary in the Crimson corpus,” and despite minor quibbling about what wasn’t included, they served the purpose very well. Trouble is, the uninitiated might not be willing to drop the dough for such a lavish introduction no matter how thorough a portrait it paints of the band. So Fripp went back to the drawing board using these two box sets as a guide, whittling eight discs of material down to The Condensed 21st Century Guide to King Crimson: 1969-2003, a double-disc set. The first thing he did was to cut all the live material, which makes the task easier but doesn’t tell the whole story of the band, who often displayed a talent for improvisation and an on-stage ferocity that they didn’t achieve in the studio. Oh well, the live material will still be there for those who catch the King Crimson bug. So each of the remaining two discs per volume had to be trimmed down to a single disc, giving us one representing 1969-1974 and one representing 1981-2003. Of course, the KC faithful will argue about which tracks were included and which were left off, but again, this set was not designed for them. They’ve probably got the vast majority of this material anyway. But this set does do a decent job of representing the various sides of the band: from the proto-metal of “21st Century Schizoid Man” to the light and airy “Cadence and Cascade,” from the skewed avant-pop of “Cat Food” to the driving “Red,” and from the math rock of “Discipline” and “Level Five” to ballads like “Heartbeat” and “Matte Kudasai.” Compiled for the curious, not the converted, The Condensed 21st Century Guide to King Crimson: 1969-2003 is sort of like a King Crimson hors d’oeuvre: a tasty morsel designed to whet the appetite for more.