Posted by Green on October 16, 2020
in blues
as John Mayall & The Bluesbreakers 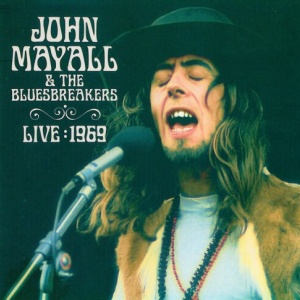 Live: 1969 captures John Mayall and The Bluesbreakers at a critical point in their hugely influential career. The first track on the album was recorded at the last performance by the ‘Laurel Canyon’ line up of John Mayall, Mick Taylor, Steve Thompson and Colin Allen at Birmingham Town Hall on May 9, 1969.
Following this tour, Mayall made two big decisions: firstly he was going to relocate to the USA and secondly he was going to form a new, more acoustic based line up which would not feature drums. This dramatic change was captured for posterity in the film ‘The Turning Point’.
The rest of disc 1 and the whole of disc 2 are the recordings made on the June 1969 tour by the new line up of John Mayall, Jon Mark, Steve Thompson and Johnny Almond. These were made during the course of the filming of ‘The Turning Point’.