Posted by Green on September 23, 2020
in blues
as John Mayall 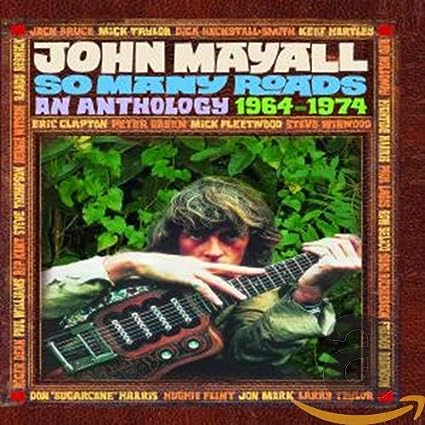 In 1992, Polydor released two double disc retrospectives of John Mayall’s career on the Decca, Deram, and its own imprint. The first, entitled London Blues, covered the years 1964-1969; the second, Room To Move, picked up at the end of 1969 and went through to 1974, his final year with the label before departing for ABC. For those who own those two collections and wonder if 2010’s four-disc, So Many Roads: An Anthology 1964-1974 is worth owning, the answer is a qualified “yes.” Of course there is overlap so you may not want to replace them only with this. But this box goes deeper and wider in an aesthtic sense — its track choices are arguably better, and the sense of flow is less fragmented. And of course, the audio is far better here. The previous collections sought to showcase the many dynamic shifts in the evolution of Mayall’s approach to blues rather than focusing on its incremental changes. What’s portrayed here is more organic and subtle. Certainly most expected tracks are included, from his first single, “Crawling Up A Hill” and “Mr. James,” from ’64; and “I’m Your Witchdoctor” b/w “Telephone Blues,” (the latter was first 45 by the Eric Clapton-era Bluesbreakers and was produced by Jimmy Page) from 1965. Disc one covers album up to A Hard Road; disc two from that album to 1968’s Blues From Laurel Canyon; disc three from 1969’s revolutionary The Turning Point through Back To The Roots; and disc four from there through The Latest Edition in 1974. There are many LP cuts obviously , but also live material, compilation tracks and singles — 74 tracks in total. While some are not obvious choices, virtually all are essential for Mayall enthusiasts. His high standards as a a recording and performing artist, are underscored by his role as mentor to younger talent– Clapton, Peter Green, Mick Taylor, John McVie, Mick Fleetwood, Aynsley Dunbar, Keef Hartley, Jon Mark, Johnny Almond, Harvey Mandel, Larry Taylor, Steve Winwood and Brad Resnick all passed through his ranks. Also notable are Mayall’s collaborations with established jazz and blues artists such as Freddy Robinson, Blue Mitchell, and Fred Jackson. The package also includes an exhaustive and engaging liner essay by Mark Powell, loads of rare photos, and complete discographical information, making it the definitive compilation.