Posted by Green on March 6, 2018
in folk
as John Forrester 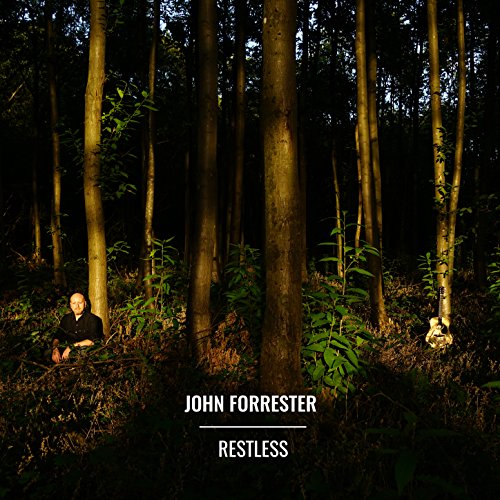 Hailing from Oxford, but recording in London and Cornwall, at times vocally reminiscent of early Richard Digance, Cat Stevens or Al Stewart, Restless is the reedy-voiced John Forrester’s fourth solo album. It’s also the first he’s recorded with an outside producer, namely Roy Dodds who encouraged him to keep things musically simple, more evocative of the bedsit folk scene if the 60s. Clearly, he took this to heart since the album opens with no instrumentation at all, the a capella intro to Richmond Hill even then only giving way to minimal cello and violin, Kath Williams on backing vocals for a musing on mortality, undoubtedly prompted by the time spent mid-album in caring for a terminally ill family member.

The past, or rather putting it behind you, is also at the heart of New Season, a song about rebirth and moving on, his acoustic guitar and double bass augmented by Andy Webb’s slide with, as throughout the rest of the album, Dodds on drums. As the title suggests, restlessness and itchy feet is a constant theme, the waltzing Somewhere I Can Be about what we leave behind, inviting accordionist George Whitfield and pianist Jenny Carr along for the journey while, piano here complemented by cello, the fluidly swaying Restless Bones offers an autobiographical reflection on the passing of time and friendships alike.

Continuing the motif, the simply strummed This Idea Flies, which features Linze Maesterosa on airy flute, concerns the push and pull of leaving for worlds unknown or staying in familiar territory. Escaping A Storm arranged for just cello and guitar tells of a woman leaving behind a turbulent life for “new chances and careless days” while, on Butterfly Catcher, the flute here complemented by cello and piano, he sings about the yearning to escape, of things to do and places to be, but being held back by someone “blocking the stairs”.

It underlines the sense of dissatisfaction that accompanies the need to be always on the move, always seeking out new places and new people, but, balanced with this, there’s also the flute flavoured mood of Dream Of Home on which, melodically suggesting a meeting of the Sandgate Dandling Song and I Come And Stand At Every Door, he sings of how “we lost so much time on the wrong course” and memories of “where we first met”.

Two numbers strike a different musical tone to the rest of the album, Trouble, which is essentially about being caught in the spell of a potentially consuming relationship, whichever way it goes, has an accordion sway-along raggy waltz, gypsy mood. Forrester hitting the darker, deeper depth of his vocals while, Paul Godfrey interlacing his violin with Whitfield’s accordion, The Black Ship, is a lyrically metaphorical recasting of The Flying Dutchman in which the narrator’s “lost forever on the rocks”, haunted by “old lovers and dirty regrets”, has a dark shanty air that conjures thoughts of Kurt Weill.

It ends with the simple strummed guitar, flute and violin (here Saskia Tompkins) folk arrangement of Stone In My Stomach, a return to the opening number’s theme of loss and mortality (“December came and took you away on its wings”) and resolution to carry on, bearing the pain through whatever life brings in the hope that, perhaps, at the end “there’s something through this nothing”, with its upbeat spin in the line “no grief without love”.

Forrester may not have the wider recognition as some of his peers and contemporaries, but, as this insightful and open album proves, he’s no less a talent.