Posted by Green on December 5, 2019
in rock
as Joe Cocker 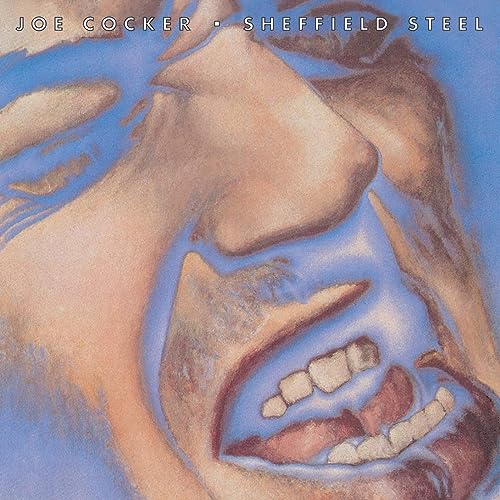 fter his one-album stint at Asylum Records with Luxury You Can Afford in 1978, Joe Cocker was without a record label until 1981, when he signed to Island Records. Island head Chris Blackwell took him to the Compass Point studios in the Bahamas, where he recorded a 12″ single, “Sweet Little Woman”/”Look What You’ve Done,” released in May 1981, then continued working on a full-length album. When that album, Sheffield Steel, appeared a year later, listeners could be forgiven for imagining, during the instrumental portions, that they were hearing not a Joe Cocker disc, but rather a Robert Palmer record. The instrumentalists were the Compass Point All-Stars, led by drummer Sly Dunbar and bassist Robbie Shakespeare, and including keyboard player Wally Badarou and guitarist Barry Reynolds, and they maintained a steady tropical groove on most tracks that strongly recalled their work on Palmer’s series of albums. Typically, however, Cocker made his own a group of high-quality songs from major songwriters. Bob Dylan’s “Seven Days” was an obscure tune only previously heard in a 1979 recording by Ron Wood. Cocker succeeded with Randy Newman’s “Marie” as he would again four years later with the songwriter’s “You Can Leave Your Hat On” by singing it without any of the irony Newman’s version contained. Cocker got a jump on what would be the title track to Steve Winwood’s next album, “Talking Back to the Night,” and he approached Jimmy Webb’s “Just Like Always” with delicacy. The result was an effective album, if, once again, a one-off effort since Cocker, his career rejuvenated by the success of the movie theme “Up Where We Belong,” quickly decamped for Capitol.