Posted by Green on October 24, 2020
in rock
as Jimi Hendrix - Valleys Of Neptune 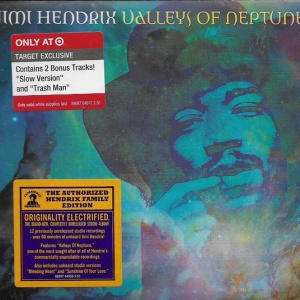 The completely unreleased studio album with 12 previously unreleased studio recordings and over 60 minutes of unheard Jimi Hendrix! Ten recordings were made between February and May 1969 as The Jimi Hendrix Experience set out to create their sequel to the groundbreaking 1968 double album Electric Ladyland. It features “Valleys Of Neptune,” one of the most sought after of all of Hendrix’s commercially unavailable recordings and also includes exciting 1969 arrangements of classic signature songs “Red House,” “Fire” and “Stone Free” and unheard studio versions of Hendrix’s inspired interpretations of “Bleeding Heart” by Elmore James and Cream’s “Sunshine Of Your Love”. The cover art is by Hendrix himself.
Stone Free: The original 1966 recording by the original Jimi Hendrix Experience is best known as one of Jimi’s signature songs. The 2000 Jimi Hendrix Experience Box Set featured a new remake by the original group. Hendrix, Mitch Mitchell and Billy Cox recorded this version in May 1969. It is a different recording entirely.
Valleys Of Neptune: This track was recorded in September 1969 and May 1970. This full band version has never been released. An extract of a demo Hendrix made of this song, featuring just Mitchell on drums and percussionist Juma Sultan, was part of the short-lived album Lifelines that was in the marketplace between 1990 to 1992.
Bleeding Heart: This cover of the classic blues song by Elmore James is different entirely from the versions featured on South Saturn Delta and originally on War Heroes. This recording has never been issued and features Jimi, Billy Cox and drummer Rocky Isaac. It was recorded in April 1969.
Hear My Train A Comin’: This electric, full band version is different from the famous 12-string acoustic version that was featured in the 1973 documentary Jimi Hendrix and subsequently on the album Jimi Hendrix: Blues.
Mr. Bad Luck: Like “Valleys Of Neptune”, a different version of this song was part of Lifelines in 1990. Jimi would later develop this song as “Look Over Yonder” that was issued as part of South Saturn Delta.
Sunshine Of Your Love: A stage favorite for the group during the 1969 period which has never been released.
Lover Man: Jimi recorded many different arrangements of this song, including the versions on both the Jimi Hendrix Experience Box Set and South Saturn Delta. This is an entirely different recording made in February 1969.
Ships Passing Through The Night: A never-before-released track taken from the last recording session by the original Jimi Hendrix Experience on 4/14/69.
Fire/Red House: Both of these songs by the original Jimi Hendrix Experience were recorded at the same February 1969 session. They feature the expanded stage arrangements Jimi had developed and are not alternate takes of the original 1967 recordings.
Lullaby For The Summer/Crying Blue Rain These April 1969 recordings by the original Jimi Hendrix Experience have never been released.