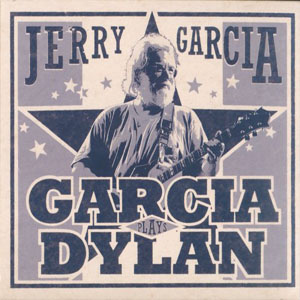 This double-disc anthology works well as a thematic companion to Postcards of the Hanging: The Grateful Dead Perform the Songs of Bob Dylan (2002). Similarly, Ladder to the Stars: Garcia Plays Dylan (2005) examines the unique relationship between the pair, featuring Jerry Garcia (guitar/vocals) in a variety of musical settings spanning nearly a quarter century. While the occasional exception exists, the contents are primarily presented in a chronological fashion. Rather than going all the way back to the pre-psychedelic Grateful Dead — when the band included covers of “It’s All Over Now, Baby Blue” and “She Belongs to Me” in its repertoire — the earliest inclusion finds Garcia fronting a quartet alongside Merl Saunders (organ) through a blues-infused treatment of “It Takes a Lot to Laugh, It Takes a Train to Cry.” Dylan provided Garcia with perhaps his most intimately interpreted material. As the liner notes point out, Garcia felt “…right in those songs.” Adding, “When I sing them I feel like I could have written them. I relate to them that well.” Nowhere can that symbiotically beneficial relationship be heard better than the profound and practically spiritual “Positively 4th Street” circa the mid-’70s Jerry Garcia Band with Nicky Hopkins (piano) and Ron Tutt (drums). Garcia also chose obscure, deeper album tracks, making them very much his own. Examples abound, ranging from the brooding and methodical “Wicked Messenger” — courtesy of the short-lived Legion of Mary — to the exploratory funk driving “Tough Mama.” On the opposite side of the backbeat are the lamenting “Knockin’ on Heaven’s Door” and a humbling, if not reverential reading of “I Shall Be Released.” By the mid-’80s the quality of Garcia’s solo endeavors equalled — if not surpassed — that of the Grateful Dead. One constant was an ever-expanding stable of Dylan tunes. One of the songs that Garcia shared with both was the rollicking “When I Paint My Masterpiece.” When it turned up — usually in the first set of Dead shows — Bob Weir (guitar/vocals) took the lead. Here, listeners are treated to a Garcia Band run through guided by some simply smouldering solos from the guitarist. Presumably in an effort to offer unreleased nuggets, the unplugged early-’90s take of “She Belongs to Me,” with just Garcia, Weir, and Phil Lesh (bass), was passed over for a rendering by the 1990-era Grateful Dead. The band sounds spent and probably was as this particular performance happened to be the second of a rare double encore. An emotive and gripping “Senor (Tales of Yankee Power)” by the Jerry Garcia Band and the poignant “Visions of Johanna” taken from the Grateful Dead’s penultimate live show on August 8, 1995, are among the remaining highlights. ~Allmusic