Posted by Green on September 22, 2020
in folk
as Jenny McCormick 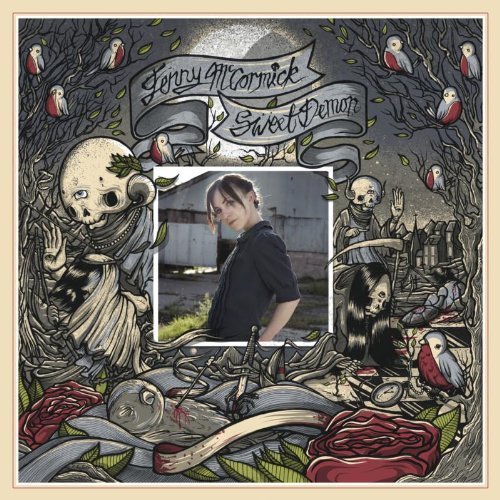 Jenny McCormick was destined to be a writer before music took hold of her direction. Her latest album sees the Mancunian songstress using her talent for story-telling to sublime effect.

In Sweet Demon McCormick delivers a mature and touching album stocked with tales of romance, madness and poetic beauty, both self-penned and traditional pieces. It is a satisfyingly well-polished and precise work in its stunning musical arrangement and solid production. The musicians have previously collaborated in both The Memory Band and The Woodbine & Ivy Band and clearly have a deep understanding of the art being created here.

The opening track, The Cinder Rosary sets the album up with an introduction to Jenny McCormick’s wonderfully seductive hushed vocal style which does not belie her Northern roots. Guitar, double bass, banjo and mandolin provide a reserved accompaniment to a testimony of lonesome longing and vulnerability. This is a soft and yet affecting lament which draws the listener close in and seeds the imagery which flows through the album.

McCormick’s arrangement of traditional tunes throughout the album demonstrates both her capability and adaptability. The Lancashire Fusilier places Jenny as the object of the song as she plays both parts in this fable of a love enlisted to some far-off maritime war. The narration unfolds cleverly as the laid-back, listing tune conjures a sense of the inevitable seaward journey – rotten rigging and creaking masts. The subtle nature of the song encapsulates the story-telling style and prevents a feeling of self-pity. It is a song of beauty rather than sadness.

There is a wonderfully uplifting scene in the strangely romantic Monocle, a short song co-written by experimental folk pioneer Sam Genders. This love song somehow manages to depict chariots, monsters and angry hordes before returning softly to declare that “the sky won’t fall if you’re standing there”. Karl Penny provides the percussion and John Ellis the piano for this quirky and somewhat brief excursion.

The wistful Evie is an alluring ballad which pairs finger-picked guitar and resonating double bass once more to give a lasting impression of the wonder of love and those embraced by it. Again, this song is all too succinct and yet, as with the rest of the compositions on Sweet Demon, McCormick carves out its story in the mature and accomplished fashion of a true literary talent.

Sweet Demon is an innovative folk album with plenty of substance to offer to those familiar with Jenny McCormick’s material as well as being accessible enough to invite newcomers. The best work on this release is in Jenny’s own compositions where her great passion for story-telling is indulged. The vitality of her velvety voice, delicate and serene, is a pleasure to hear and this is balanced expertly with a wealth of talented musicians. Sweet Demon is an album with enough complexity and variety to remain on the playlists of all who are willing to immerse themselves.