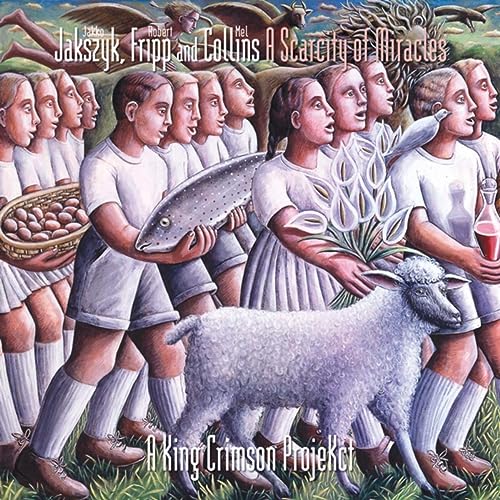 With King Crimson on hold since their live reunion of 2008, this instalment of the ProjeKct series – in which members break down into smaller research and development units – has caused surprise in some circles by proving to be an album of finely crafted, mid-paced songs rather than the fast-moving, genre-blurring instrumentals that characterised previous outings.

Yet the ProjeKct experiments weren’t ever about a single given style, but more to do with evolving beyond a creative impasse. The catalysing force this time is guitarist/vocalist Jakko Jakszyk (the only non-Crimson member present here), whose extrapolations of the initial improvised guitar duets with Fripp into ornate full-scale songs is a stunning achievement.

Whilst Fripp is hailed for his acerbic, angular playing whether with King Crimson or via his ‘wild card’ appearances with Peter Gabriel, David Bowie, Brian Eno et al, there’s always been a yearning streak in his work which he gives full rein throughout. His clean and sparse lines carve a heartbreaking melodicism and aching melancholy on the title-track and undulating waves of The Price We Pay. As ever, Fripp’s incisive fretwork is devastating.

Mel Collins, playing with Fripp for the first time since 1974’s Red, was always every bit the equal of the feted guitarist. Here he focuses on concise but telling sax commentaries rather than any obvious soloing. Across the rumbling grooves of Secrets, he turns in mocking soliloquies and some spectacular soaring choruses that nag and push at the prowling gravity of bassist Tony Levin and drummer Gavin Harrison.

The sombre mood hanging over the album is matched by a terse sense of restraint which only breaks cover for the explosive paranoia of The Other Man and the discursive atonalities of The Light of Day which closes the album. An especially bleak Fripp/Jakszyk improvisation is disconsolately adorned by multi-tracked voices and gouging scrawls of acidic sax. It’s dark and powerful stuff.

A Scarcity of Miracles is a branching of the Crimson family tree with the co-option of an external member, and as unprecedented as it is unexpected. Whether it continues to grow further is anyone’s guess. On the basis of what’s here, let’s hope it does.