Posted by Green on March 5, 2021
in alt-country, latin
as Howe Gelb & A Band of Gypsies 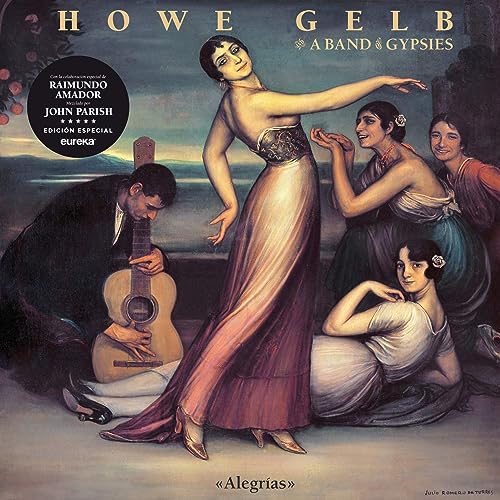 Giant Sand’s Howe Gelb readily indulges his musical obsessions. On 2006’s ‘Sno Angel Like You, he fronted the Voices of Praise gospel choir. Four years later, it’s flamenco music, a form many artists, American and European, have tried to work with and failed. Gelb wandered through Spain in search of flamenco. By chance, he wound up in Cordoba and met famed producer and musician Fernando Vacas who introduced him to a slew of local musicians called A Band of Gypsies, led by famed guitarist Raimundo Amador (who has played with Björk and B.B. King). Gelb and this band including guitarists Juan Panki, Lin Cortés, and Añil Fernández on cajon recorded Alegrias on a rooftop in Cordoba. Mixed by John Parrish, it was released in Spain on Vacas’ Eureka imprint in June, 2010, and nominated as a finalist for best fusion album in the Premios de la Musica’s 15ª Edicion awards. It’s been reissued worldwide by Fire Records. The program consists of 13 songs, including reworked versions of Giant Sand tunes and some from Gelb’s solo records. The Spanish word “alegrias” literally translates as “joy,” but also refers to one of the strictest of flamenco palos (forms), which contains a rhythm of 12 beats, and is similar to soleares, but with different accents. Gelb, who stretches any form he writes in to the breaking point, actually led by A Band of Gypsies, melds his own music with flamenco’s rich rhythmic palette, but he pushes back, too, which results in something belonging solely to this unique collaboration. Gelb’s singing has never been better than it is here. The Giant Sand tunes are beautifully rendered and are given new meaning, with gorgeous rhythmic pulses and that triple layer of interwoven guitars and other sparse instrumentation and vocals, without giving up their Arizona feel. (Check “Always Horses Coming” and “Blood Orange.”) That said, given the fluidity in Gelb’s songs, most of the tunes meld nearly seamlessly with flamenco, including “Uneven Light of Day” and “Cowboy Boots on Cobble Stone.” Other numbers are sensual, and almost humidly summery, like “4 Door Maverick” and “Broken Bird and the Ghost River” (the latter includes a jazzy piano and a female backing chorus singing in near-bossa style). “The Ballad of Lole y Manuel” features a ghostly upright, and weaves together nuevo flamenco, jazz, and desert blues. Alegrias is a breezy yet luxuriant exercise in cultural fusion with none of the setbacks: it’s a quiet stunner.