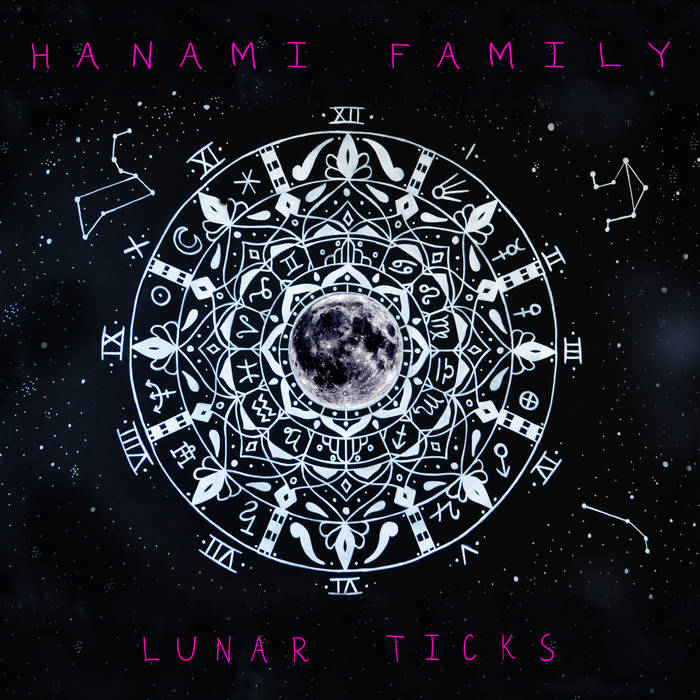 With 12 years’ experience travelling and playing all across Europe comes unimaginable beauty, understanding and storytelling. Hanami Family stand testament to that with their third album ‘Lunar Ticks’; released in association with Smugglers Records (UK) and Celebration Days Records (France).

Cheshire based Hanami Family can usually be spotted occupying the stage as a two-piece; iconic soulful male/female harmonies accompanied by a marching drum and the shimmering call of a 12-string guitar. However, for Lunar Ticks, the family is extended by an array of fresh faces and sounds. This includes Contra Bass, Banjo and Harpsicord to name a few!

Hanami Family boast a sound reminiscent of that of the 70s, somewhere in-between rock and folk. Easy listening made even easier by the suns warmth (so crack open a beer and stick this one on in the garden). The album opens with ‘White Heron In The Rushes’, the name already instilling images of summer and nature upon the listener. To me it’s one of them songs that would make the most menial tasks (take washing the dishes, for example) and turn it into a fun game everyone can play. Everything from the catchy hook in the vocals to the clean groove of the guitar makes this track fun, easy listening and a great opener. This leads us onto track two: ‘The Surprise Inside’. A walking song. Honestly, put this song on in your head phones and take a stroll around one of your favorite spots; you’ll get it! Next, and arguably my favorite, is ‘Love Is Chaos’. After a suspenseful opening the listener is hit with layers on layers of creativity and musicianship, in a more classic rock style than the previous two tracks. Picture Jefferson Airplane but with more dynamics and we’re nearly there, not quite though, something stands out about this song and I still cannot find what the secret ingredient is. Track four, ‘Higher Lover’, greeted me like an old friend. I had heard a more stripped back version of this song nearly a year ago, along with a music video (you can find it on YouTube). Again, the layering of instruments and stunning harmonies really do play testament to the creativity and musicianship of Hanami Family, it’s certainly not a sound you hear much among modern music.

Half way through the album it seems to take a more atramentous tone but, through some kind of song writing beauty, manages to keep its summery, naturalistic feel. Track five is called ‘DIG’ and has an almost American west vibe to it. Painting pictures of an American hero riding off into the sunset after a whiskey fueled gunfight with a few local bandits. ‘Out Here With Us’ follows with a moody, bass led groove. Again, I felt that American west vibe (I definitely might have wanted to be a cowboy when I was younger) but this time I felt like I was being taken on an epic journey by the band, no gunfights or shots of straight bourbon here. After the journey we find ourselves ‘Over The Mountain of Madness’. A beautifully haunting song, using string instruments to perfectly compliment the banjo and agile vocals. Again, I was overcome with a great sense of journey with this track, but more of an adventurous journey; discovering something new. The album draws to a close with another favorite for me: ‘Space Lullaby’. The song is exactly as the title would suggest: a spacious, soothing and somewhat pacifying song. The vocals complement each other charmingly throughout the whole of the album; but something about this track just really shines through.

Overall, the album has a great and completely unique sound. The journey it has taken me on through the multiple times listening to it has been a task to get down into words (and this is my third time trying!), I still don’t think I’ve got it; which gives you all the more reason to check it out yourself. So, keep your eyes and ears peeled for the 4th May when Lunar Ticks drops for all your listening pleasure! In the mean-time be sure to follow them on their journey through social media and get yourself along to a gig or three to get the full experience.