Posted by Green on July 15, 2021
in british folk, psychedelic
as Green Diesel 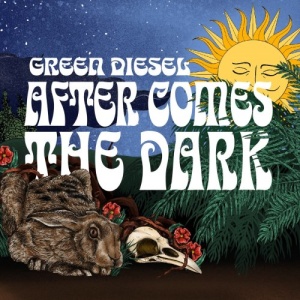 After Comes The Dark – the long-awaited fourth album from Kent-based folk rock band Green Diesel.The album was recorded during 2020 at Squarehead Studios in Sittingbourne and is the first to feature the band’s new five-person line-up. The album also marks the debut of drummer, Paul Dadswell, from Kentish acid-folk band Galley Beggar.

Guitarist, vocalist and multi-instrumentalist. Greg Ireland, comments:
“After Comes The Dark is a kind of ‘folk in technicolor’. We used the studio to experiment with different sound textures and extra layers of vocal harmonies and you can hear that we’ve been inspired by more psychedelic sounds, too. There are plenty of prog rock and ‘Canterbury Sound’ influences in there.