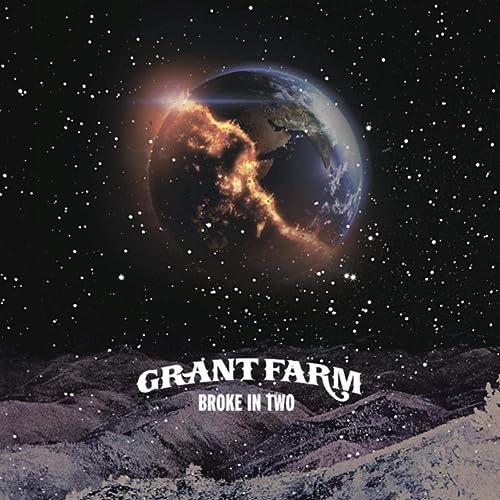 Hailed by Jim Lauderdale and Neal Casal as one of the top bands in that vaunted intersection of country, bluegrass, and especially rock ’n’ roll, Grant Farm continues to carve out its own niche. Grant Farm introduced us to their fabled brand of storytelling with 2016’s Kiss the Ground, where they sang of characters like The Innocent One, The Wanderer, and the Monarch King. Broke in Two evolves those stories as The Innocent One and The Wanderer appear in “Arjuna The Believer” and Nester the Condemned joins The Monarch King in “Nester.” We get some new characters too, introducing The Rebel in “Life of Riley” and the Caregiver in “Tumbleweed.” If it sounds like something from the Mekons, it’s not, although, like them, Grant Farm is a collective. All four members write and three of them sing.

The band was established in 2010 by guitarist/vocalist Tyler “The Champ” Grant, a National Flatpicking Champion (clearly heard in his deft guitar solos) with a history of playing with Abigail Washburn and others. Original members Andy Thorn (Leftover Salmon) and Keith Moseley (String Cheese Incident) have moved on. Current members include bassist/vocalist Adrian “Ace” Engfer, drummer Sean “Magic” Macaulay and keyboardist/vocalist Kevin “Money” McHugh. Seasoned in the jam band festival circuit, the band brings those sensibilities and more to their sound.

These ten tunes bring just over an hour of music, either on one CD or a double-vinyl set. A few singles have been issued already, including the opening upbeat “Morning Train.” Although the characters and storylines are thematic, most of these songs, like “The Golden Charioteer” can easily stand alone. It’s a mix of fiction and reality as real life experiences intertwine with the characters in the spiritual “River Styx” where true experiences of loss passed on to the bereaved. Similarly, in “The Salmon Song” they touch on life, loss, and reality.

“Life Of Riley,” one of the simpler arrangements, has plenty of infectious hooks to keep you humming along, making it a perfect car song. Grant’s economical guitar solos, like several others, evoke Jerry Garcia. The closing epic title track, just shy of ten minutes, unlike the others begins acoustically before the band joins in and choruses build, posing the question “We are one, broke in two, out in this strange place, who are you?” It’s acoustic guitar/organ-driven vibe gives way to pensive and heartfelt electric guitar soloing later, but in total it is unlike any other cut. It’s a special one, seemingly devised for live performance, where perhaps it may stretch to 20 minutes or more.

This Colorado-based unit, unlike some jam bands, has a knack for writing good songs. The talent of the players goes without saying. On this, their fifth album, their “Farmily” fan base will surely grow.