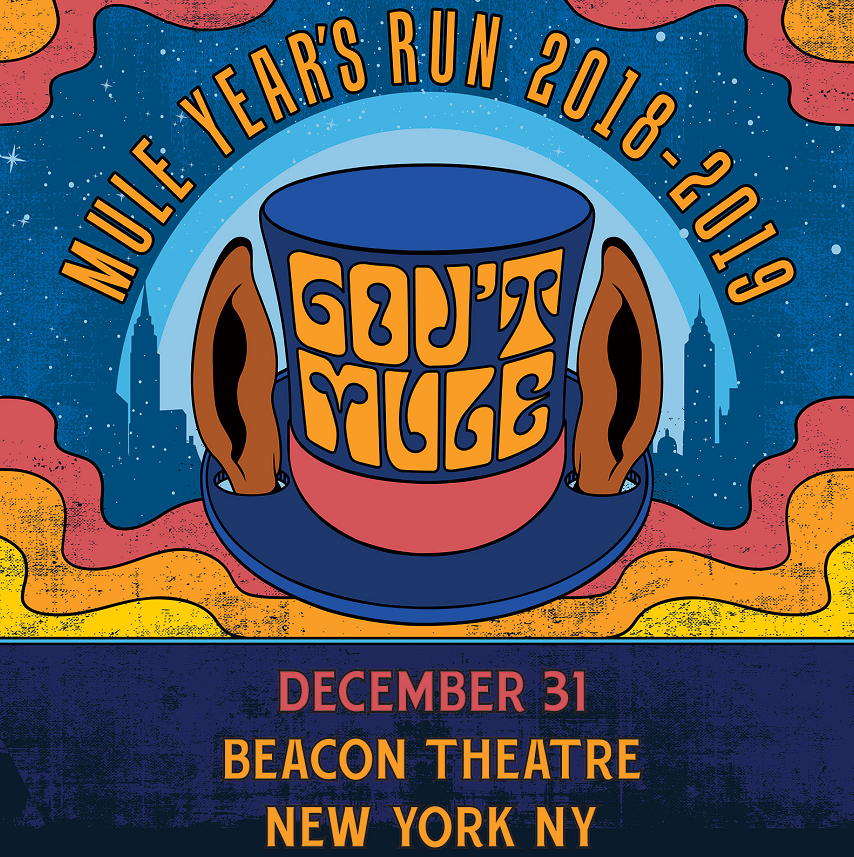 Gov’t Mule closed out 2018 they way they have ended almost every year since 2002 with a celebratory show at New York City’s Beacon Theatre. The band rang in 2019 with the help of Jackie Greene and Saturday Night Live drummer Shawn Pelton dedicating their entire second set to traveling tunes loading the frame with debut covers about modes of transportation and being on the road. The four-piece got their evening going at the historic 2,800+ capacity venue with “Broke Down On The Brazos” that segued into “Tributary Jam.” From there, Warren Haynes & Co. would work their way through cuts from their own catalog before offering up their first taste of the transportation-related theme of the night with “Railroad Boy” from 2009’s By A Thread. Later in the opening frame Mule would drop the debut of Jimi Hendrix’”Hear My Train A Comin’” in the middle of “Blind Man In The Dark.”

Mule was joined by Greene and Pelton for their entire second frame. The augmented ensemble appropriately opened things up with “Traveling Tune” from Revolution Come…Revolution Go. Next, they would reel off a string of debuts with Deep Purple’s “Highway Star,” The Rolling Stones’ “Silver Train” from Goats Head Soup, The Black Crowes’ “Wiser Time” and Little Feat’s “Two Trains.” “Trane” from Mule’s 1995 self-titled debut came ahead of their first-ever take on Lynyrd Skynyrd’s “Tuesday’s Gone.” The cut from (Pronounced ‘Leh-‘nérd ‘Skin-‘nérd) was used to help welcome in 2019 as it segued into the traditional “Auld Lang Syne.” The debuts kept coming as Mule & Co. would offer up the Grateful Dead’s “Casey Jones,” Tom Petty & The Heartbreakers’ “Runnin’ Down A Dream,” Allman Brothers Band’s “Seven Turns” and “Ramblin’ Man” and Jethro Tull’s “Locomotive Breath.” First time takes on “Traveling Man,” a song that Ricky Nelson made famous in 1961 and Bob Seger’s “Beautiful Loser” helped close out the lengthy stanza. Gov’t Mule continued to work in transportation songs when they returned for their encore. The foursome was joined once again by Pelton and Corky Laing to start things off. The Mountain drummer subbed for Matt Abts as the ad-hoc act dug in on yet another debut this time delivering “Crossroader” from the hard rock band’s 1974 album Twin Peaks. An extended drums jam followed as Laing, Pelton and Abts showed off their percussion skills. Jimmy Vivino emerged next for Jeff Beck’s “Freeway Jam” and the final debut of the night Bob Dylan’s “It Takes A Lot To Laugh, It Takes A Train To Cry.” The blues standard “Key To The Highway” brought Mule’s New Year’s Eve show to close.