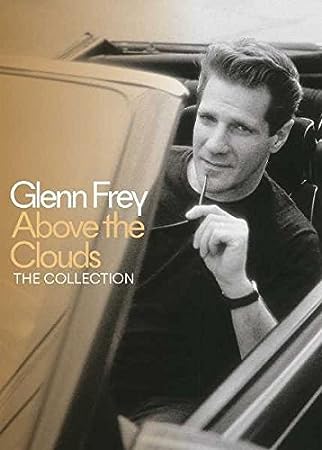 Celebrate the very best of Glenn Frey’s solo career with a stunning four-disc 3 CD/DVD box set, Above The Clouds: The Collection. Above the Clouds compiles the key elements of Frey’s music both before and after the Eagles became international superstars, showcasing the broad range and wide influence of the Detroit-bred singer-songwriter in the process.

The first disc, aptly subtitled The Very Best of Glenn Frey, is chock-full of major chart hits, including the Beverly Hills Copsmash “The Heat Is On,” the gritty, slide-guitar-driven gutbucket groove of “Smuggler’s Blues,” the epic Miami Viceballad “You Belong to the City,” the inward-looking poignancy of “Soul Searchin’,” and much more. This disc will be available as a stand-alone disc as well as part of the box set. And while Glenn clearly embraced the burgeoning video age, nabbing a vaunted 1985 MTV Music Video Award with the cinematically dramatic clip for “Smuggler’s Blues,” it’s the enduring essence of the man’s songwriting skills on display here that truly sealed his legacy as a solo artist.

Disc 2 explores Frey’s prowess beyond the charts, from the classy to the classic. Included are the broad swath of “After Hours'” his majestic take on “For Sentimental Reasons,” a harmonic nod to the Beach Boys with a spot-on cover of “Caroline, No,” and the sheer battle cry of “Route 66” among them.

The third disc highlights the early output of the duo formed by longtime friends Frey and JD Souther known as Longbranch/Pennywhistle makes its digital debut. Originally released on the Amos label in 1969, the self-titled Longbranch/Pennywhistle may have ultimately been consigned to the side bins of the acid-rock era, but songs like “Kite Woman” and “Run, Boy, Run” serve as the literal seeds of the country-rock movement Frey and the Eagles perfected to a T. Besides navigating the success of his own fine solo career (see “You’re Only Lonely”), Souther also went on to be a chief Frey collaborator on such pivotal Eagles songs as “Best of My Love,” “New Kid in Town,” and “Heartache Tonight.”

The final disc, a live DVD culled from a telling performance at the National Stadium in Dublin, Ireland, on September 15, 1992, on the Strange Weather tour, shows Frey and his top-shelf band at the height of their powers, veering from the cool-breeze manifestos of “Long Hot Summer” and “Peaceful Easy Feeling” to the rip-roaring crackle of “Strange Weather” to the everyone-join-in vibes of “Party Town.”