Posted by Green on September 3, 2021
in progressive rock
as Frank Zappa 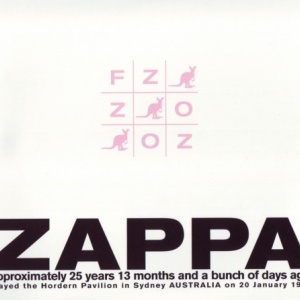 Official Release #70. This two-disc set represents almost all of Frank Zappa’s concert on January 20, 1976, at Hordern Pavilion in Sydney, Australia. The only problem is that there was only one reel-to-reel machine to record the concert, necessitating missing portions of several songs to change tapes; these gaps were replaced by excerpts from a pitch-corrected bootleg from the same tour, with an obvious drop in sound quality but little loss in continuity. This particular band – with tenor saxophonist Napoleon Murphy Brock, bassist Roy Estrada, drummer Terry Bozzio, and keyboardist Andre Lewis (in his only tour with Zappa) – has only been represented sporadically on Zappa’s earlier releases.

It’s a great opportunity to hear songs in early incarnations, such as “Canard Toujours” (which went through a series of revisions before appearing as the lengthy “Let’s Move to Cleveland”), the blistering instrumental “Filthy Habits,” the hilarious “The Illinois Enema Bandit,” and several tracks which first appeared on Zoot Allures in different form (“Zoot Allures,” “Black Napkins,” “Wind up Workin’ in a Gas Station,” “Find Her Finer,” and “The Torture Never Stops”). One song, “Kaiser Rolls,” makes its first appearance with two versions, a concert rendition with a missing portion added and a rehearsal recorded just prior to the tour. Zappa also revisits earlier pieces (“Stinkfoot,” “Lonely Little Girl,” “How Could I Be Such a Fool?”), as well as extended treatments of “Chunga’s Revenge,” “Advance Romance,” and a brief reggae version of “Take Your Clothes off When You Dance.” Zappa’s guitar solos are of the usual high caliber, and his band is well rehearsed, though some numbers would have benefited with the presence of a slightly larger group, as the sound sometimes seems a little thin. This release will be of considerable interest to serious Zappa collectors.