Posted by Green on August 24, 2020
in british folk
as Fairport Convention 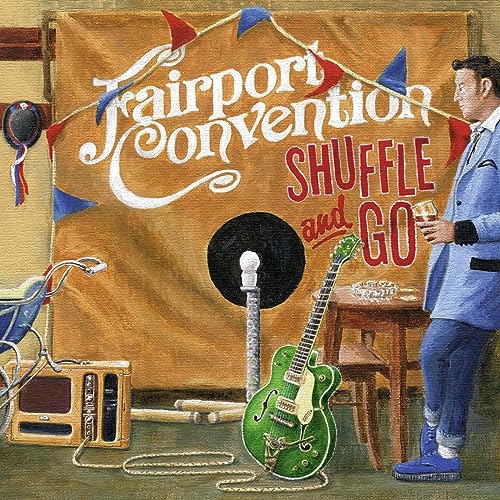 Three swift years on from when Fairport’s 50th was celebrated, and they’re still making consistent music that never falls below the top-notch bracket, keeping it all fresh with regular touring activity and a steady flow of new material for stage and subsequently record. A tried-and-tested modus operandi that works for this most long-established of Fairport lineups, one that shows no sign of getting stale, instead, an astonishing, seemingly never-ending capacity for reinvention and reinvigoration. Shuffle And Go, which must be somewhere around the band’s 30th studio offering (yeah, I’ve lost count!), is inevitably a further demonstration. Its brilliant disc package, knowingly designed by Mick Toole, says it all, and to perfection. The outer cover displays (alongside the essential tracklisting – which is properly readable, unlike that of so many albums nowadays!) Mick’s painting (a snappy montage gathering together familiar retro and heritage-nostalgia elements). In contrast, the inner gatefold opens to reveal a generous portrait gallery of the five individual band members in poses that can only be described as happy bunnies, content with their lot, contented without being complacent, comfortable in their own skins and enjoying every blessed moment of it!

And so, then, to the moment of (audio) truth – the all-important music within… Well up to expectations, of course! For with any new Fairport album, we’ve come to expect something like 50-odd minutes of high-quality, caring and fun-loving music-making; nifty, natural and wholly unassumingly brilliant playing (and singing); and a great new bunch of accessible and relevant songs and instrumentals that will outlast the years yet doubtless also plant some earworms along the way. But there’s also bound to be some surprises in the mix, and a “discovery” cover or two. And all the while, the process – and folk tradition, both ancient and modern – is treated with due respect, as is the listener.

So far so true for Shuffle And Go, then. Although, as a personal observation following the pattern set by many of the band’s previous studio albums, the track sequence may prove a bit of a challenge at first, and not reveal its logic initially. Here, too, it certainly feels to demand some thought en-passant. But heigh-ho… The album kicks off with brooding drumbeat ushering in Don’t Reveal My Name, an edgy, perhaps cryptically ominous card-sharp-outlaw ballad, the first of five well-contrasted Chris Leslie songs on the album and a bit of a slow-burner: pretty powerful, if not the most obvious choice for an album opener. The second track, Cider Rain, switches style onto easy-mid-tempo jangling summersome folk-pop built around a vision of a bucolic haven. It’s a composition credited to James Wood, Luc Boisseau and Philippe Richalley (“members of the band Rosemary & The Brainless Idiots, who live in Nantes in Brittany”, to quote Peggy’s liner note). Well, I guess I’m none the wiser, except that it’s an attractive little number that earns its keep companionably enough.

What most listeners would term “the real traditional Fairport” breezes in at track 3 with Good Time For A Fiddle And Bow, a bouncing reel-time Chris Leslie number inspired by the life of the great Donegal fiddler John Doherty, featuring (of course) great little fiddle solos, suitably infectious rhythms and handclaps and more than a little of a John Gaudie feel; it’s generously rounded off by a sprightly jaunt through Tommy Coen’s Christmas Eve Reel. Then Simon takes centre stage for the second of the album’s covers – and the first of two by Rob Beattie. A Thousand Bars is a nicely observed reflective commentary on changing society and mutual tolerance, a bit of a lament and a bit of an anthem set up with a suitably catchy “list” chorus (think Little Johnny England, Merry Hell, John Richards); I suspect this one’s destined to become something of a favourite.

Then it’s down to rockin’ the joint with Shuffle & Go itself, on which Mr Leslie dons his quiff and aftershave for an authentic ’50s-reeking reminiscence, a delectable summertime-blues ’n’ morris conflagration from the same class in school as the Tyger Hutchings Beat Combo. Tremendous retro fun, and brilliantly dispatched in the regulation 3 minutes! Ringing the contrast once again, and back to the skilled songwriting of Rob Beattie, With its gently lilting kalimba rhythms, Moses Waits takes Rob’s community observation into a more personal realm but, with a more widely embracing outlook, transposes the story to Kenya, invoking that country’s ambiguous practices and society as portrayed by the watchful Moses himself. Back to instrumental high-jinks then for the first of the disc’s two Ric Sanders compositions, the evocatively-titled Steampunkery – a cautiously turbocharged slice of dextrous jollity under-riffed by the Peggy Bass that charges in like Hank Marvin then soon develops a frenetic mandolin-led double-time swing and a fast shuffle to the finishing line.

The chug-along uke-led Linseed Memories, which constitutes the next interlude, chummily reprises a James Wood song that graced Peggy & PJ (Wright)’s duo album Galileo’s Apology back in 2006. It’s pleasingly “customised” by some judicious double-tracking, but overall it doesn’t quite convince me it needed another “innings” here in the context of this album. No matter, for it’s soon over, and Chris Leslie’s cheery opus The Year Of Fifty-Nine, which follows, proves another of the disc’s high spots; inspired by a newspaper account of a UFO sighting near Chris’s home town of Banbury in that very year, as it might have been observed by Chris himself at a very early age; it’s a rather catchy piece, bedecked with namechecks for contemporaneous (and almost contemporaneous!) events and artefacts. Local legend continues to figure large in the ensuing Byfield Steeplechase, a rumbustious P.J. Wright number in the distinctly-traditional mould, with one of those “I should know that melody!” tunes (a bit like The Widow’s Promise maybe?) set to a bouncy, joyfully folk-rock beat. Inevitably, it’s a stirring tale of betting derring-do – and yes, it tips the nod to Sandy Denny’s home village!

Into the final stretch now, and the outer-space theme returns for the final Chris Leslie composition, Moondust And Solitude, which imagines the lonesomeness of Apollo 11 astronaut Michael Collins when he was left on board the module when his colleagues walked on the moon; a lilting waltz-time setting is a perfect vehicle for this wistful song (and am I fanciful in hearing an echo of Paul Simon’s America here too?); the track’s closing stages incorporate a sample of the astronaut’s voice. The delightful penultimate track is an unusual choice of cover – Jolly Springtime, a simple little folky-gospel creation by James Taylor (as I only recently discovered myself – it’s from his 2015 comeback album Before This World), which is topped and tailed in glorious a cappella and also incidentally features Ric’s bass uke. The song sure sounds custom-made for Fairport! The album’s final track is a pensive and beautiful Ric Sanders instrumental, Precious Time, plainly dedicated “for Angie” and absolutely lovely. Who knows where it all goes, indeed?…

So there we have it. Shuffle And Go is another solid, and solidly desirable, entry in the Fairport canon. For the vintage Fairport fans (and I mean that in the kindest sense), there may be no strictly-“trad-arr Fairport” here, but the wonderful music on this album is firmly in what has come to be regarded as the “latter-day Fairport tradition”.