Posted by Green on November 12, 2019
in acoustic, jazz
as Eugene Chadbourne & Henry Kaiser 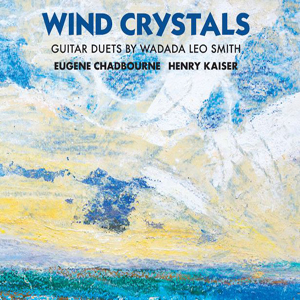 First, a brief history. Henry Kaiser and Wadada Leo Smith have collaborated before, most notably on their Yo Miles! Project, as well as in various other settings. In fact, Smith had actually written “Wind Crystals” for Kaiser’s first recording for Eugene Chadbourne’s label…and the seeds of this recording were planted. Forty years later, Chadbourne and Kaiser decided to pay homage to Smith by recording several of his compositions for dual guitar/strings and rerecording the piece that started it all (with “it” meaning this four-decade triangle of on-off [and recently mostly off, it seems] collaboration).
Wind Crystals begins and ends with contending versions of the title track. The first is the 1977 version. The last, the 2017 one. The first is sparer and captures the spirit of windchimes. The second is one of the most active pieces on this album, and possibly one of the best. All sounds are acoustic, but there are times in the latter piece that I hear howls and hums amidst the frolicking dialogues. What a fine and different interpretation.

Other tracks are similarly off-kilter but focused. Pieces such as “Shabazz,” “Blue Lightning Blue,” and “Blue Case” run replete with bluesy undertones. Even more, however, they disassemble the tradition, using its pieces as a sort of spolia with which to build a new, warped edifice or sonic fragments with which to construct an aural collage. (Yes, Derek Bailey seems a major influence, though the tracks here have somewhat more melody and rhythm than Bailey ever let slip.) Other tracks, such as “Pacifica” have a twangy vibe and are in striking contrast to, but also in awkward continuity with, the version on Spiritual Dimensions. At points, they even capture the trills, runs, and even the cavernous qualities of Smith’s horn, albeit in a more sinuous, skrony, broken bluegrass sort of way.

In short, these are inventive and absolutely compelling interpretations of these compositions. If you are a fan of Wadada, I would recommend checking this out if for no other reason than to experience some of the alternate potentialities of his music. If you are a fan of Dr. Chad and the Kaiser, you already know what you are in for: craggy guitar music played to explore strings, vibrations, resonances, and spaces, rather than muffle them into something mellifluous and smooth. Even considering the catalogues of all three musicians/composers party to this project, Wind Crystals, in its dedication to the acoustic avant-garde, is really out there and a real triumph of invention, resourcefulness, and composition. One of the best albums I have heard all year.