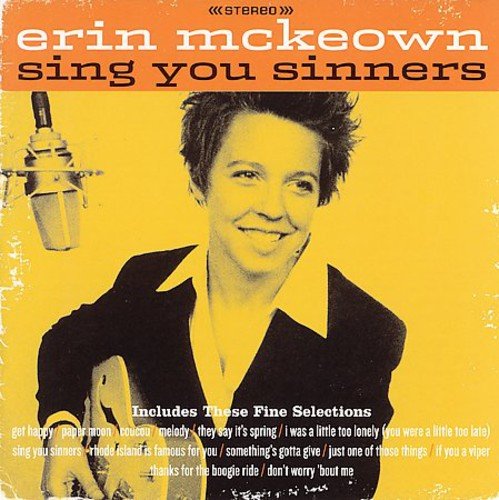 With the rise of the Hollywood extravaganza and the ensuing decline of vaudeville, American music lost much of its kick and joie de vivre. However, with her album Sing You Sinners, Erin McKeown sets forth to single-handedly resurrect the wayward cast-offs of Americana and return them to center stage, but with a sparkle and humor that is a poignant reminder of an age long gone.

Today, “Get Happy” is probably the best known song on the set, famously delivered onscreen by Judy Garland, but McKeown and her backing trio, further buttressed by a horn section, turn the song inside out, threading it through myriad musical styles, from its champagne piano intro across the shifting sands of jazz, into R&B and rock & roll, and out into ’60s surf. In just over three minutes, “Get Happy” gleefully dances its way through three decades of music styles. “Paper Moon” is an equal classic, but now shines over the Caribbean in its new reggae-fied calypso gladrags. And of course, jazz fans will instantly recognize Fats Waller’s “If You a Viper,” but McKeown’s vampish version is built around not piano, but her banjo and a walking bassline. Anita O’Day’s “Thanks for the Boogie Ride” rode off in big band style; in contrast, McKeown drives it straight into rockabilly. Cole Porter’s elegant “Just One of Those Things” now ebbs and flows between moody jazz, darkly ambient Bristol Sound (à la Massive Attack), and brooding surf. McKeown herself contributes one song to the set, “Melody,” an exuberant, ragtime rave-up dedicated to the glories of melody itself. And it’s melodies that McKeown loves, so she never disrespects them, showcasing each one’s enduring qualities, while simultaneously creating stunning new musical backdrops for them. Bar “Melody,” the songs all date between 1930 and 1955, while the arrangements travel even further afield, from the ’20s into the ’60s, capturing virtually the entire range of popular musical styles along the way. It’s a toss-up whether McKeown had more fun with the arrangements or her vocal performances, but the entire set is imbued with a sparkle and a whimsical sense of humor that is absolutely infectious. In all the best ways, McKeown makes every one of these songs her own, most notably “Rhode Island Is Famous for You,” so much so, that some fans mistakenly believe McKeown wrote the 1948 number. You’ll never think of a cover song in the same way again, and to have created an entire set of such inspired versions is sheer genius indeed.
Collapse ↑