Posted by Green on February 2, 2019
in blues, cajun, folk
as Eriksson Delcroix – 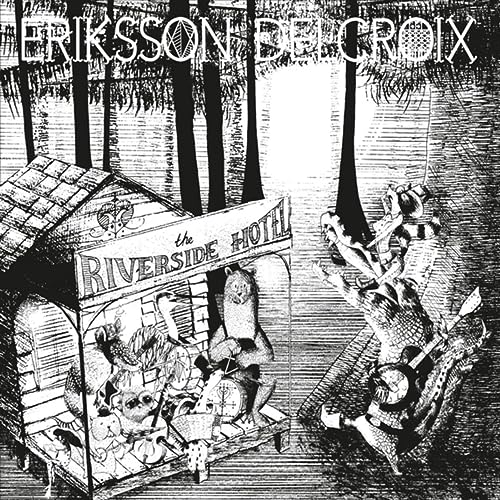 The Riverside Hotel is moving away from the conventional Americana sound and makes room for the new Funhouse where Eriksson Delcroix seem to have found their happy days again, where the moon is shining clear after a dozen of beers! Only one rule at the Funhouse that Eriksson Delcroix created in the Summer of 2018: the joy of playing music, freely, without boundaries thru different landscapes of African voodoo, native American rituals and French Louisiana settler’s songs! The Riverside Hotel is where Eriksson Delcroix feel free again, liberated after seeing the darkness of Heart Out Of Its Mind and Magic Marker Love! Happy Days are here again so why don’t you just pull over? Recording sessions @ The Eriksson Delcroix Mansion were A Celebration of Life itself, in all his regards: living, laughing, dancing & drinking, feeling so Louisiana Hot!

In between recording sessions, Bjorn and his loyal ED travelling companion Alain Rylant, took a road trip into the Deep South of the USA, hitting the Appalachian Mountains, cruising along the Mississippi River, Louisiana and Texas, rocking the legendary Blues Trail to plunge into the mud and swamps of American Music beyond country music! Bjorn & Alain stopped at the famous The Riverside Hotel @ Clarksdale/Mississippi! Overwhelmed by The Legendary Delta Blues Hotel where Blues Legends like Muddy Waters, Howlin Wolf or even Ike Turner stayed over as they were travelling South! Some of them just moved in permanently like Robert Nighthawk! Bam bam, it was there with 2 six packs of local beer and a Stella Guitar, the crickets in the background and a notebook, that they got the right vibe to bring this Delta blues and Cajun feel back home to finish up their 5th studio album @ The Eriksson Delcroix Mansion, spiced up by the joyful, playful vocals of Nathalie, Eriksson Delcroix brings us Happy Days with this Cajun Masterpiece, called THE RIVERSIDE HOTEL!