Posted by Green on June 30, 2019
in folk, krautrock, psychedelic
as Dire Wolves 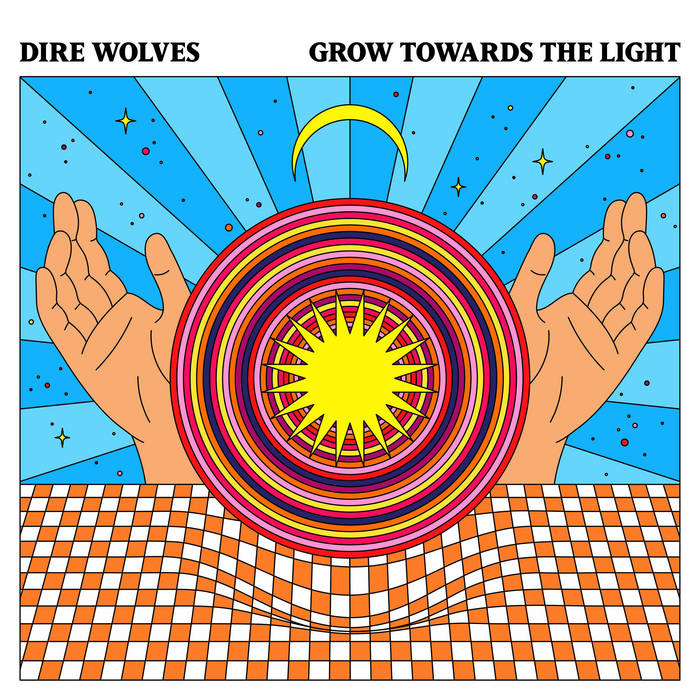 Recorded in Oakland, CA during a two day stretch, “Grow Towards the Light” is Dire Wolves’ 4th official full-length album (not including the fifteen or so minor releases, bootlegs, and tapes they’ve put out over the years), and it’s the first without Lau Nau on main vocals. Taking over that role is the mystical Georgia Carbone, singing in her own invented language. Regarding the album title: you can really hear the sun pulsating through the space clouds, if you know what I mean. Jeffrey plays guitar and moog here, joined by Brian Lucas on bass, Sheila Bosco (from Faun Fables) on drums and piano, Arjun Mendiratta (Village of Spaces) on violin, and Taralie Peterson (Spires that in the Sunset Rise) on saxophone.

“Every Step Is Birth” features a dark, plodding groove. It sounds like the soundtrack to a sinister after-party in a place you suspect might actually be purgatory. I happen to know that Jeffrey Alexander followed the Dead around for the better part of the 1980s, and you can hear that influence here, but also shades of musical styles from all over the globe. “Every Step,” with its shrieking violin and Georgia’s haunting vocals, builds into a trance-like, cinematic climax. All of this becomes all the more impressive when you realize that every note of this recording was improvised.