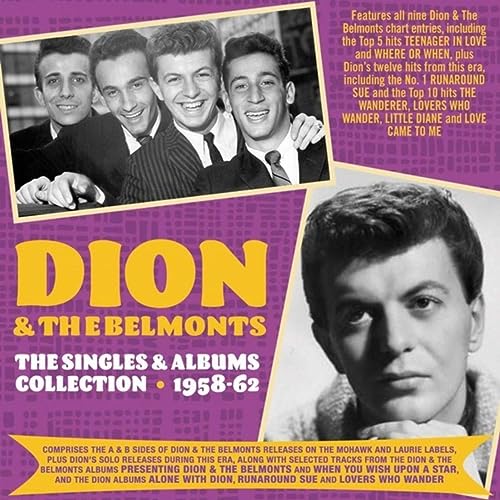 Dion DiMucci was one of many significant names of the rock n roll era to emerge from the Italian diaspora of the USAs north-western states, his career encompassing doowop-influenced early hits with Dion & The Belmonts followed by landmark solo successes, all within the space of a few intense years of chart action. Born in the Bronx in 1939, he was the son of a vaudeville entertainer and came to music early, singing on street corners and in bars, auditioning for producers for whom he made records as Dion & The Timberlanes for the Mohawk label, before assembling the Belmonts to get a deal with the New York label Laurie, making the charts with I Wonder Why. The Top 5 Teenager In Love and No.3 Where or When followed and they had nine hits before Dion left to go solo in 1960, and over the next three years he had a dozen hits including the classics Runaround Sue, a No. 1, and The Wanderer a No. 2. This excellent-value 58-track 2-CD set comprises the A & B sides of his early Mohawk releases, plus the A & B sides of the Dion & The Belmonts singles and Dion solo singles during this era, along with selected titles from the Dion & The Belmonts LPs Presenting Dion & The Belmonts and When You Wish Upon A Star, and from Dions solo albums Alone With Dion, Runaround Sue and Lovers Who Wander. It naturally includes the 22 chart entries he had across the two phases of his career during these years, and provides a fine showcase for his highly distinctive style as a vocalist both in the group format and solo, and underlines why his contribution to rock n roll was so significant.