Posted by Green on October 29, 2019
in southerrn rock
as Dickey Betts & Great Southern 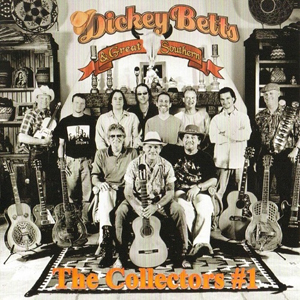 Dickey Betts joined the Allman Brothers Band as second lead guitarist and singer in the late ’60s. In addition to matching bandleader Duane Allman lick for lick, Betts also wrote such memorable songs as “Revival” (number 92, 1971) and the instrumental tour de force “In Memory of Elizabeth Reed.” After Duane Allman was killed in a road accident in 1971, Betts and Allman’s brother Gregg shared leadership of the band, with Betts writing and singing the group’s biggest hit, “Ramblin’ Man” (number two, 1973). Members of the band began solo careers in 1973, and Betts released his first solo album Highway Call, in 1974. The Allmans split up in 1976, and Betts formed Dickey Betts and Great Southern. The Allmans reformed in 1978, with Betts contributing “Crazy Love” (number 29, 1979), “Angeline” (number 58, 1980), and “Straight From the Heart” (number 39, 1981). But they split again, and both Betts and the Allmans were inactive for several years. Betts returned with the Dickey Betts Band and Pattern Disruptive in 1988, and in 1989 he and a couple of members of his backup band joined a second, more permanent re-formation of the Allmans.