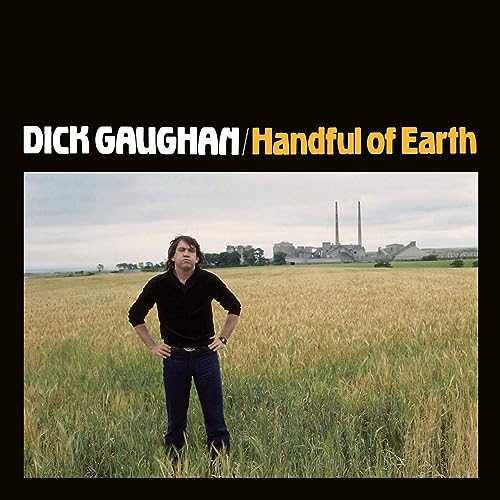 Dick Gaughan had had a successful career in the 1970s including a year with The Boys of the Lough, and a couple more with Five Hand Reel. Towards the end of the decade, his playing reduced to a point of virtually stopping and his mental health was suffering. Recovery thankfully led to re-finding performance and to recording his fifth album, Handful of Earth. Considered an outstanding album on its release it became Melody Maker’s Album of the Year, and, at the end of the 1980s, it was Folk Roots’ album of the decade. Now it is to be re-released as part of Topic’s Treasure Series, celebrating 80 years of the record label and 80 years of excellent music.

Has it stood the test of time and does it merit standing alongside the others in the series? The short, definitive answer is yes, it does. The sound is still fresh, the songs still sound urgent, gritty without being rough. They are heartfelt, the emotion of the artist influencing the song, driving its impact. There is an interesting juxtaposition to be heard when placed alongside two of the other Topic Treasure releases – Shirley Collins and Anne Briggs. Both of these artists stand back from the words and let the song tell its own story, let the lyrics and the melody reveal its own intensity. Dick Gaughan on the other hand positively imbues his songs with passion. This passion is not ephemeral either. We are not listening to an actor creating a character, emotions and all, to tell the tale. These tales, these songs reflect him. We look beyond the Dick Gaughan exterior. You can imagine a chat with him will be just the same – ardent and direct and emphatic.

Some of these passions are not easy to grasp straight away though. They are not readily worn on the sleeve. Ken Hunt in his notes for this re-release of the album points us towards the use of nature, the ground, and our attachment to it; attachment, not ownership. By chance or design, birds make frequent appearances in these songs. Now Westlin’ Winds has a veritable list; The Snows They Melt the Soonest has a solitary swallow; Craigie Hill, small birds singing and thrushes warbling. The swallow is a migratory bird as is the displaced worker in Craigie Hill, migration being very much part of the collective consciousness of peoples affected by clearances, famine and misrule.

This political – and Political – content marks this out as an important album, not only as a marker of the times then, but also of the artist. If ever there was an album as apposite for now as it was nearly forty years ago, then this may well be it. As I write, the journalist Lyra McKee has been shot dead in Northern Ireland. Is there not a better time to listen to Erin-Go-Bragh? This is a song about prejudices, Dick says, a situation he must have known about when growing up: his mother a Highland Scot, Gaelic and Calvinist, and his father an Irish Roman Catholic. This background is also celebrated with Robert Burns’ Now Westlin Winds and Phil and June Colclough’s Song for Ireland.

Also this week, the Scottish First Minister is calling for a referendum for independence. This time the call for the vote has perhaps a little more edge than at the time of recording Both Sides The Tweed. Then the perceived separation from the UK wanted to retain the idea of close friends on the table; today, friends-with-benefits may be on a side table, but I suspect in another room.

1982 was three years into the Thatcher Years, a period of acute polarisation, between Left and Right wing, between nationalist and unionist, in both Scotland and in Northern Ireland, and between the haves and the have-nots. Have we really not moved on? Are we still looking at the same things? Despite Handful of Earth being released 38 years ago, these songs still reflect the times, still call out the oppressors and still support the oppressed.