Posted by Green on September 19, 2020
in rock
as Dave Edmunds 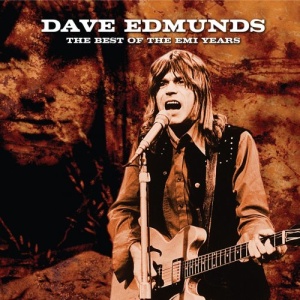 The Best of the EMI Years is really just a somewhat expanded version of the earlier EMI collection I Hear You Knocking (the latter not to be confused with the live album of that title), putting together 20 cuts drawn primarily from Dave Edmunds’ late-’60s tenure in Love Sculpture, plus the 1970 hit “I Hear You Knocking” and tracks off of his 1972 solo album Rockpile. It’s also not as comprehensive as the Early Edmunds set, and those who own the latter can probably skip this CD, but for non-completists who are only interested in Edmunds’ best work, this CD does have its advantages — Love Sculpture’s prog rock output, which mostly was not its strongest material, is given little space here, with the exception of “In the Land of the Few” and “Sabre Dance” (assuming one puts it in that category) — the latter appearing here in its single edit. Instead, the collection favors the rootsier, bluesier sides of their output from those years, which fits better with Edmunds’ subsequent output. The resulting CD is actually a very generous cross section of the most durable part of his work up through Edmunds’ emergence as a star in his own right at the start of the 1970s, with just enough variety — including some enjoyably loose-limbed pub rock — to give the uninitiated an idea of his true range as a musician. Those who only know him from his work with the group Rockpile or his more widely distributed work on the Swan Song label from the second half of the 1970s and beyond will also find The Best of the EMI Years an enjoyable introduction to Edmunds’ early work. The sound is excellent throughout, and the collection overall is a satisfying overview of his early career.