Posted by Green on February 8, 2020
in country, folk, swing
as Dan Hicks And The Hot Licks 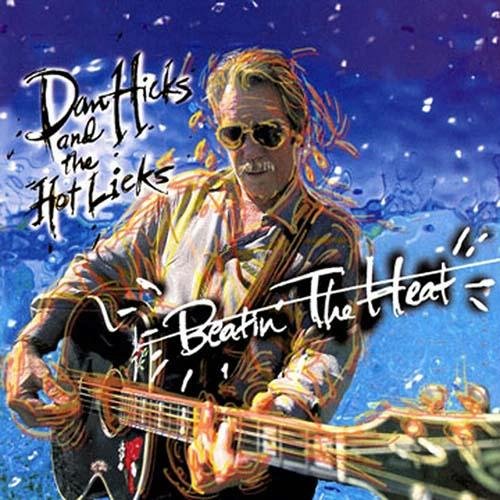 He’s never stopped playing live, yet Dan Hicks’ first album in six years, and his only studio release since 1978’s It Happened One Bite, has to be considered a comeback of sorts. Interestingly, little has changed in the musician’s idiosyncratic style that effortlessly meshes country, bluegrass, ’40s pop, Western swing, folk, and even blues together to produce music completely unique unto itself. The proof of Hicks’ low-key genius is that through his decades of making music, few have attempted to mimic his eclectic and often wacky approach. Stylish guest stars Rickie Lee Jones, Tom Waits, Elvis Costello, Bette Midler, and even guitar slinger Brian Setzer drop by to add color, but thankfully they never hog the spotlight from the self-effacing Hicks. Fiddle/mandolin player Sid Page is the only holdover from the original ’70s Hot Licks, but not much has shifted in Hicks’ rarefied world. His talk/sung/scatted vocals, bone-dry humor, as well as call and response from the Andrews Sisters-styled backing vocalists are in place, and the 15 tracks are among the best, most fully realized he’s ever recorded. Intricate yet swinging, Hicks and his band sound loose and relaxed as if this was a jam session in his living room that was accidentally recorded. Song titles like “Don’t Stop the Meter Mack,” a song about stalking; “I’ve Got a Capo on My Brain,” which is as loony as its name; and a remake of his most covered tune, “I Scare Myself” (with Jones on duet vocals), exhibit Hicks at his witty best, but everything here is classic Hot Licks. Even an occasional sample and subtle drum loops don’t detract from the distinctively stylized slant. Even with the high-profile visitors it’s unlikely to put him on the charts, but Beatin’ the Heat is a glorious, superbly crafted return, and arguably the best album in Dan Hicks’ slim catalog. It’s a perfect introduction for newcomers and a wonderful treat for established fans wondering if Dan Hicks would ever release another album.