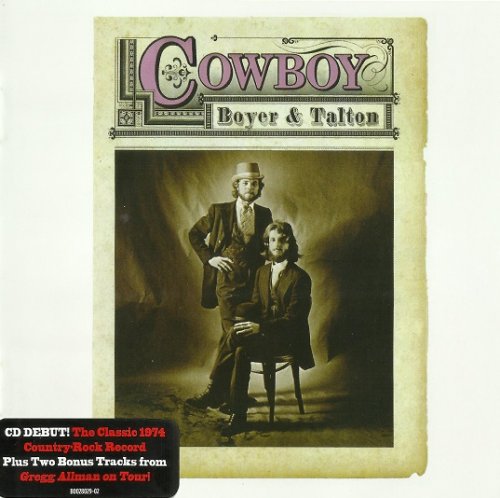 Having released their first two records to great acclaim, and with the recent passing of producer Johnny Sandlin and the even more recent passing of Scott Boyer himself, it seemed like a good time to circle back to the last two Cowboy records for Capricorn, which, like our first two reissues, feature liner notes by Scott Schinder featuring great quotes from Tommy Talton and pictures from Tommy’s private archive. As the title indicates, this 1974 album—produced, like the first two, by Capricorn mainstay Johnny Sandlin—found the group down to its creative core of Scott Boyer and Tommy Talton. But their new back-up band wasn’t half bad: Capricorn regular Bill Stewart on drums, future Charlie Daniels Band bassist Charlie Hayward, Allman Brothers Band members Chuck Leavell and Jaimoe on keyboards and percussion, respectively, and saxophonists Randall Bramblett and David Brown, the latter a former member of Boyer’s old Florida combo the 31st of February, which also included Duane and Gregg Allman as well as future Allmans drummer Butch Trucks (plus a cameo from Toy Caldwell of The Marshall Tucker Band)! Most of this same aggregation backed Gregg Allman on Laid Back, and indeed went on tour with him, which we’ve documented with the two bonus tracks that featured Cowboy from The Gregg Allman on Tour album, “Time Will Take Us” and “Where Can You Go?” As for Boyer & Talton, it remains one of Tommy Talton’s favorite Cowboy albums (and one of their fans’ favorites, too), though he modestly points to a Boyer song, “Everyone Has a Chance to Feel,” as a particular standout. But you won’t go wrong with any track on this album…masterful, melodic American music. CD debut, remastered by Mike Milchner at SonicVision!