Posted by Green on November 27, 2019
in experimental, folk, indie
as CocoRosie 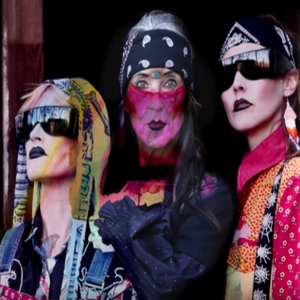 CocoRosie is an American musical group formed in 2003 by sisters Bianca “Coco” and Sierra “Rosie” Casady. The sisters were born and raised in the United States, but formed the band in Paris after reconnecting for the first time in years. Their music has been described as “freak folk” and “New Weird America”, and incorporates elements of pop, blues, opera, electronica, and hip hop.

CocoRosie began as a duo, with Sierra singing, playing the guitar, piano and harp, and Bianca singing and manipulating various children’s toys, electronic, percussion instruments, wind Instruments, as well as other exotic noisemakers. They subsequently added various backing musicians, usually a bassist, keyboardist, and beatboxer. They have been a very active touring group, playing across Europe, North and South America, and elsewhere. They have released six full-length albums: La maison de mon rêve (2004), Noah’s Ark (2005), The Adventures of Ghosthorse and Stillborn (2007), Grey Oceans (2010), Tales of a GrassWidow (2013), and Heartache City (2015).