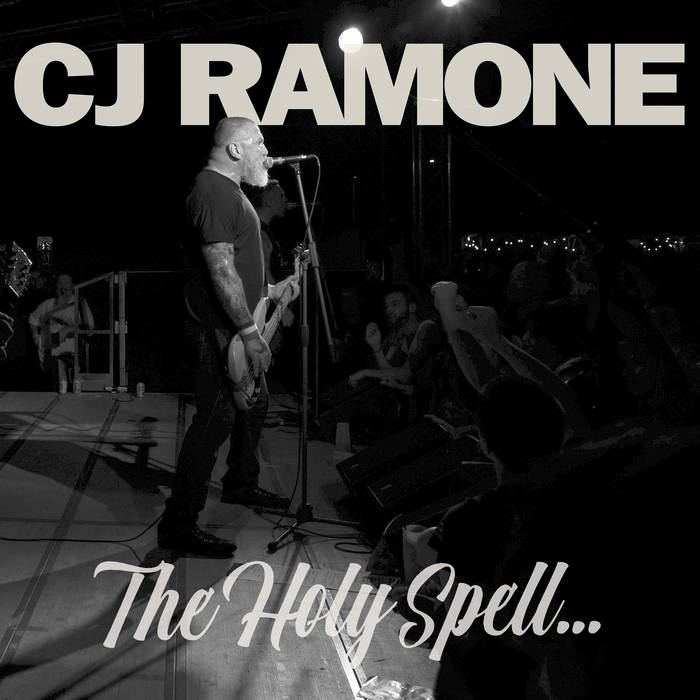 For the most part, the songs on The Holy Spell (his fourth solo LP) continue to reflect his time with the Ramones. This shines through on tracks like “Stand Up”, “This Town”, and “Waitin’ on the Sun” among others. And while the Ramones influence is obvious, CJ has developed his own sound over the years. And you hear that CJ-esque melodic progression on songs like “Postcard from Heaven” and “Blue Skies”. But you can also hear various other musical styles bleed through. The opener “One High One Low” has a surf-rock feel with a blues progression and a ripping lead riff, but still retains a classic sing along chorus. “Hands of Mine” and “Movin’ On” are country tinged, the latter of which channels Johnny Cash’s “Folsom Prison Blues”, though I’m not sure if this is intentional or coincidental. The classic country influence is clarified even further with CJ’s take on a 1953 Webb Pierce song called “There Stands the Glass”. The melody remains, but the song is transformed into one of the fastest songs on the album. Conversely, the other cover song, “Crawling from the Wreckage” sounds very similar to the original.

Overall, the record has a clear positive vibe, reflective of CJ’s attitude towards life in general. You can tell that he still loves to write and perform and he maintains that youthful musical energy. There are exceptions to this though. “I’m Disappointed” is a somewhat dismal (but still rockin’) tune about getting old, with a touch of humor. Still, that comprehensive positive disposition transcends throughout the record, even on the closer “Rock On”, which was written about the death of Steve Soto of the Adolescents who had been heavily involved in CJ’s music. Rather than sadly mourn the death of Soto though, he chooses to immortalize his friend with a classic rippin’ punk tune.

With this album, CJ Ramone continues to preserve the legacy of his brothers in the Ramones, all while developing and maintaining his own sound. And even though he is a punk rock legend, he still remains humble. He is doing this for all the right reasons. For the love of music. For the love of punk. And for the love of his fans. That’s pretty refreshing these days.