Posted by Green on August 13, 2021
in experimental, folk
as Chris Stamey & Kirk Ross 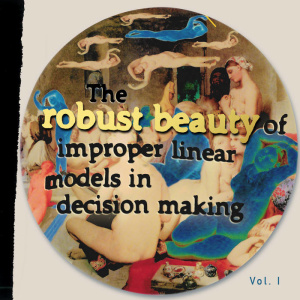 One of the endearing qualities about this record is that it’s maintained its mysteries. Decades later, maybe it’s time to unlock a little of the origin story.
“For me, Robust Beauty began one night in downtown Chapel Hill with a butterknife.
The night of the butterknife was sometime in early 1994, not long after Chris had moved back to Chapel Hill. He came out to see a showcase of outside bands, including mine. Lud didn’t have songs then, just rituals. One was that in preparing the guitar you had to use a found object from the gig site, often a stray piece of metal or glass from the parking lot. That night, I was in a hurry and grabbed a butterknife from the kitchen, and played the set with it jammed in my strings. It made an eerie racket and was great fun. The show must have made an impression because Chris told me later he wanted to start a band called Butterknife. That didn’t happen. This record did.”

The sessions for Robust Beauty centered around a marathon three-day improvisation in summer 1994 with amazing NC percussionist Ed Butler in a studio inside the famous Cats Cradle nightclub. Ira Kaplan, who was playing there with Yo La Tengo, also joined us on several songs. It was a reunion of sorts, Chris and Ira having played guitar together in NYC in the early days of YLT.

The sounds collected became the basis for these compositions for “prepared and unprepared guitars,” a parking lot of moments scattered with pieces of metal and glass, plastic and wound and unwound wire ready to be jammed into a medium and recomposed. Kirk brought battery-powered kitchen appliances, a toy horse and some railroad spikes, minicassette players loaded with field recordings; Chris brought wide-tuned guitars and a Photon optical guitar device; Ed’s percussion was both manufactured and found and included a mazhar and a particularly well-tempered socket set. Some of the pieces created over those intense few days were instantly suitable for framing, others required loops, fractals, a toast, or more windup toys.