Posted by Thomas on June 16, 2021
in country, rock‘n’roll, rockabilly
as Charlie Feathers - 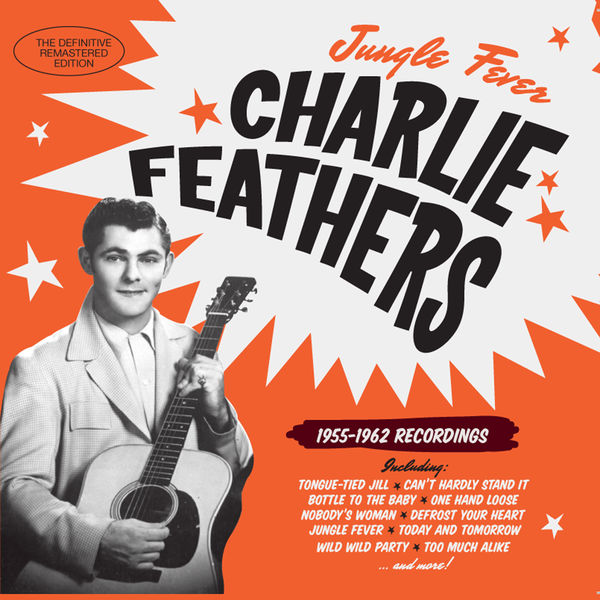 Charlie grew up in rural North Mississippi and was taught guitar by his friend, Junior Kimbrough, before heading off to nearby Memphis in 1950 with a view to making it in the music business. He should have been massive, being one of Sam Phillips’ first white signing to Sun Records, writing some great songs and having (arguably) an even better ‘stage’ name than Elvis Presley, who he soon be-friended. Sadly, it was not to be, as even though he recorded regularly for Sun and other labels such as Meteor, Kay, King and more, a mix of bad luck, poor decision-making and an impatient personality all contributed to a life among the also-rans and nearly-men. The notes to this set suggest that it may also have been that, despite his instinctive and natural feel for rockabilly, his distinctive ‘hiccupy’ vocal delivery was too pure for mass consumption.

From this distance of course none of this matters overly much. Thanks to releases such as this, we still have the opportunity to hear and revel in his great music of the period and this CD presents 30 great tracks as recorded for a variety of labels. These naturally include the handful of tracks that his name is most frequently associated with; the classics that regularly appear on the best rockabilly compilations -l Tongue-Tied Jill, Everybody’s Lovin’ My Baby, Bottle To The Baby and, of course, Can’t Hardly Stand It (as later given the full treatment by The Cramps). Each of these are immense and deserve to be heard time and time again but I also adore his early raw and raggedy country-fied hillbilly recordings, such as A Wedding Gown Of White, I’ve Been Deceived, Peepin’ Eyes and Defrost Your Heart. Even the later recordings where he (or more likely his record companies) looked to broaden his appeal by adding pop arrangements and vocal group support are generally pretty fabulous. Check out, for example, When You Decide or, even better, Too Much Alike, perhaps my favourite Charlie Feathers record of all time and a certainty for one of my selections when I appear on Desert Island Discs (note to Kirsty – invitation still yet to arrive!).

If you have any interest at all in rockabilly or early rock and roll and you don’t have any Charlie Feathers in your collection, this is now the CD to start with. It has 30 corking tracks, is available at a lower price than the El Toro set and only offers a couple of alternate takes (the El Toro perhaps works best for established fans as it has plenty of previously unavailable alternate takes, demo versions and other rarities).